Haier was present at MWC this year, with a couple of MIDs on display, strangely enough dubbed “NetBooks”. The device you can see on the left of the image below is a mini-laptop that was also showcased at Haier’s booth, accompanied by other similar portable devices. 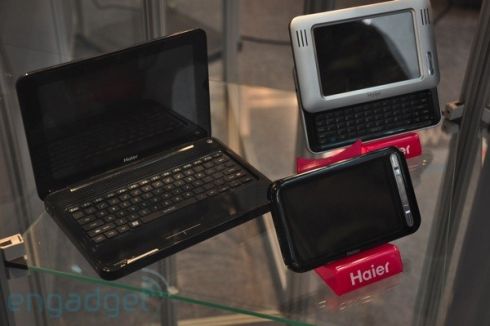 The company had also brought two Android handsets at MWC 2009, unoriginally named the G1 and G2, plus a BlackBerry 8900 twin that didn’t make it to the famous blogs’ photo sessions.

The two Android phones were out of battery, at least when the folks of Engadget tried to test them, but what they found out was that one of them resembled the BlackBerry Storm, only lighter, smaller and with a new OS.

Haier HL-G100 Gets Certification From TENAA; Looks Just Like the Huawei Ascend Mate7

A New Device Designed For Senior Citizens Gets Certification From TENAA; Is Called Haier Z1 And Comes With SOS Button