Home MediaTek Hot or Not? MediaTek Helio X20 versus Snapdragon 810 Face off in...

The MediaTek Helio X20 is the chipmaker’s first 10 core processor and as such it will be a very interesting product to follow, till it reaches device makers. Apparently, there are already heavy tests conducted on this chip, as proved by some internal MediaTek documents, that have leaked recently.

The documents show a testing comparison between the MediaTek Helio X20 and the famous Snapdragon 810. The test was done using gaming, browsing and it also involved measuring the devices’ temperatures. These are internal tests, so they may be a bit biased. The analyses involved both dummy phones with the two CPUs performing a series of tasks, like casual browsing on WiFi for 10 minutes, then playing Asphalt 8 on high graphics for 10 minutes and then Modern Combat 5 for 10 minutes.

Snapdragon 810 used its low powered cores for the first 15 minutes and then it goes to the high power mode, reaching around 45 degrees Celsius. However, after playing the game Modern Combat 5 for 5 minutes, the heat went down for an unknown reason. The MediaTek Helio X10, that was also involved in the test, achieved as high as 38 degrees Celsius and juggled around with the lower cores and medium cores, before switching to the higher end ones, to decrease temperature.

A similar method is used by the Helio X20, that didn’t even reach 35 degrees during the test. Once again these are dummy phones, without connectivity and sensors, so in real life the heat may go higher, as those components also need power and CPU power. 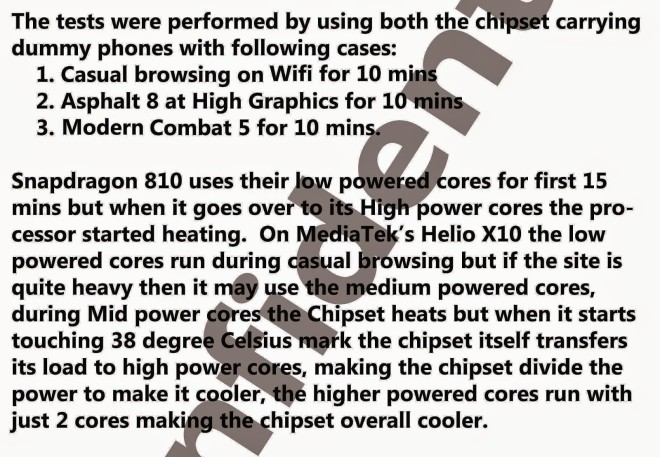