Actually, after Engadget fell for it we could say that PlayBoy Magazine rather estimated the price, instead of quoting actual sources from HP. These are the HP TouchPad tablet and Pre 3 smartphone we’re interested in. The June issue of PlayBoy mentions that the Pre 3 could be priced at $200 on contract. 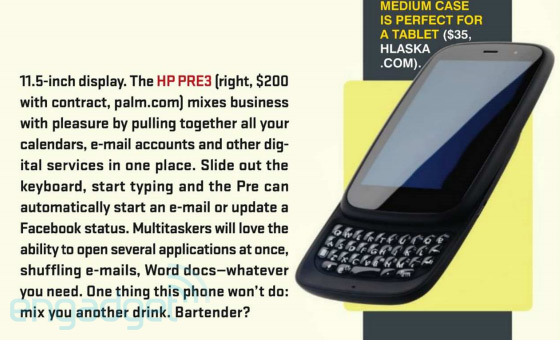 The 9.7 inch tablet dubbed HP TouchPad will come with a $500 price tag and no subsidies, if the PlayBoy estimates are right. If the magazine has inside sources we have no idea, but it seems that right now they’re lucky guesses that should be close to the truth. Just as a reminder, the Pre 3 is a 3.6 inch smartphone with a sliding keyboard.

At $500, the TouchPad slate would be a pretty handsome rival for the iPad 2, with a similar pricing for its lowest specced version. We’ll just have to wait and see.