HTC Trophy is a device you’ve heard about for a while now, actually for almost a year if we’re not mistaking. Initially it was supposed to be a front facing QWERTY gizmo with Windows Mobile on board, but the latest leaked shot of the handset portrays a full touchscreen smartphone: 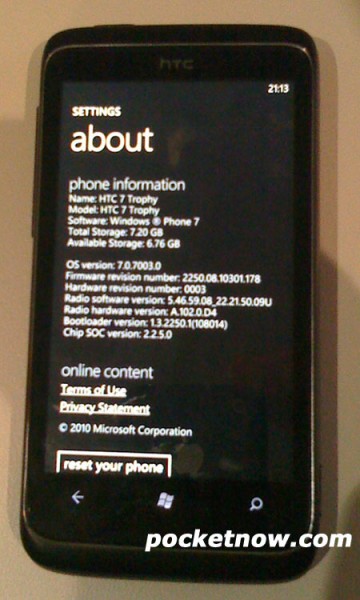 First rumored in December 2009, this unit was supposed to feature a 3 inch VGA display, a 5MP camera and 7.2Mbps HSPA. Now, it has turned into a Windows Phone 7 phone, that was spotted at the Global Certification Forum this month. Long gone are the days of May, when the Trophy was expected to be launched with WM 6.5 on board…

Rumors claim that this model uses HTC’s Windows Phone 7 Sense hub, that was shown in a video from a couple of days ago. I guess we’ll have to wait and see how this plays out.