We knew a couple of details concerning the HTC Desire HD handset, but now the device has been partially confirmed, thanks to a British retailer, who published the product on its site. Also, mobiles.co.uk, said retailer mentioned a mysterious handset, HTC Desire Z. 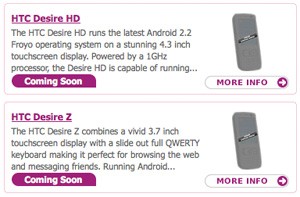 mobiles.co.uk is a subsidiary of Carphone Warehouse and the handsets they’re preparing are probably those that will debut on September 15, when HTC has an event scheduled in London. While HTC Desire HD is a familiar face, since we know that it runs Froyo, packs a 4.3 inch display and an 8 megapixel camera, Desire Z has yet to reveal itself.

As far as we know, this new Desire model runs Android 2.1, features a full sliding keyboard and a 3.7 inch display. This sounds very much like the HTC Vision phone, although this is pretty much lucky guessing at this point.