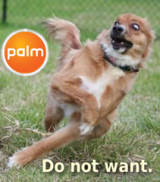 Palm’s a troubled company, we all know that, with a huge inventory of unsold product, dropping sales and market share. It was rumoured that HTC might buy it, but a couple of other names of interested companies also surfaced. The problem is that after a peek at Palm’s books, HTC was the first to bail out (as shown in the funny picture by wmpoweruser) and now Huwei also gave up on the American company.

Lenovo is now considered favourite for acquiring the maker of Treo and webOS handsets. As far as we know, at the end of 2009, Lenovo had $2.4 billion in net cash reserves while Palm’s estimated price is $1.3 billion, so the figures fit perfectly. Lenovo is familiar with big buyouts, since it managed to perfectly integrate the ThinkPad brand from IBM.

Also, the company paid $200 million in January to acquire Lenovo Mobile Communication Technology, an unit it sold back in 2008. Will we see Lenovo handsets running webOS in the future?