HTC Glacier has just hit the web, courtesy of a couple of benchmark stats and we learn that this is a dual core Android phone, supposedly part of the T-Mobile Project Emerald. Spotted by AlienBabelTech in the GLBenchmark 1.1 database, the device performs much better than usual 1GHz smartphones. 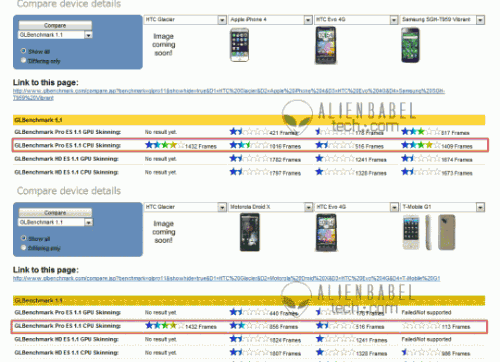 Some snooping around lead to the conclusion that the person testing the device was a T-Mobile employee and if you’re wondering about specs, there’s no trace of them so far. All we know is that HTC Glacier runs Android OS and relies on an 800 x 480 display. This could be HTC’s very first handset to use a dual core Qualcomm Snapdragon CPU.

Said processor began sampling back in early June, with Qualcomm promising both 1.2GHz and 1.5GHz versions.