After catching a glimpse of some HTC Incredible details hours ago, we learned that Verizon Wireless just published the handset’s specs on its site. Turns out that the smartphone will feature a 3.7 inch WVGA OLED touchscreen display, with a 480 x 800 pixel resolution, an 8 megapixel camera with autofocus and video capture and much, more available after the break. 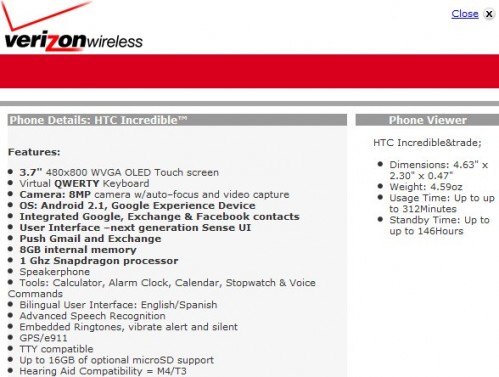 The OS of choice is Android 2.1 and the device also relies on Sense UI. HTC Incredible uses 8GB of internal memory, a 1GHz Snapdragon processor, a speakerphone, it supports speech recognition, incorporates a GPS and a microSD card slot. This handset seems very much like an upgraded Nexus One, specially thanks to the inclusion of Sense UI and that cool 8 MP camera.

Looking forward to getting an official price and launch date for this baby.