It appears that HTC is not ready to rest on the laurels of what seem to be big sales of the One series devices and are already preparing new models. I’m talking here about the rumored HTC Golf unit, that already leaked last week and also about this newcomer, the HTC J, also codenamed ISW13HT. This device appeared on the HTC Japan website, only to be pulled soon after.

HTC J was listed as coming to Japanese carrier KDDI and being compatible with the WiMAX network. As you can see, its design isn’t similar to the one of the HTC One series of handsets, so it’s a different model, maybe a localized one. The handset was also mentioned as running Android 4.0 with HTC Sense 4.0 and packing the new Qualcomm Snapdragon S4 CPU, a popular choice for new smartphones nowadays. 1GB of RAM and 16GB of storage, plus microSD were all on board.

The device’s screen is a 4.3 inch qHD unit and the J was shown in a white version and had Beats Audio earbuds bundled with it. The measurements indicate a phone that’s 10mm thick, so way thicker than the One X and One S slim handsets. Also listed within the leak there was a Spring 2012 launch date, but I can’t guarantee it will ever leave Japan. 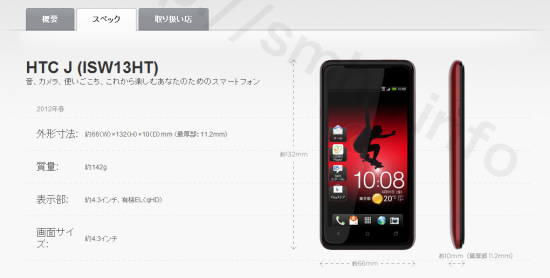