Home HTC HTC One A9 Specs Confirmed by AnTuTu; Mid-Range Phone with Snapdragon 620... 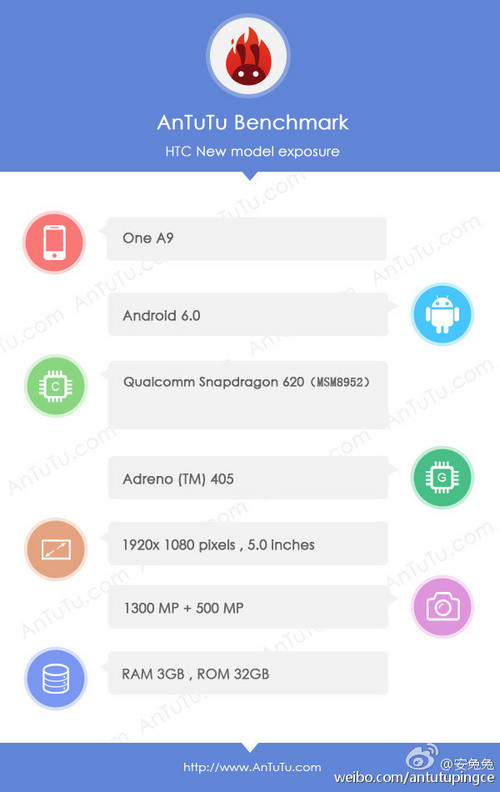 Today, September 29th, not only Google will hold a press event, but HTC too. During this conference, the Taiwanese producer could announce an international variant of the Butterfly 3, and maybe the rumored HTC One A9. What comes like a confirmation of A9’s specs, are standing today some screen captures from AnTuTu benchmark.

As you can notice, this smartphone will pack a 5-inch Full HD display (1920 x 1080 pixels), an octa-core Qualcomm Snapdragon 620 processor on 64-bit, 3 GB of RAM memory and 32 GB space of internal storage. HTC One A9 will offer an Adreno 405 GPU, and a 13-megapixel rear camera with autofocus and LED flash.

The rest of the specs are completed by the presence of Android 6.0 Marshmallow as default operating system, and of a 5-megapixel front-facing sensor. Even if HTC One A9 won’t be the flagship we all expected, a decent price-tag might make this phone a pretty interesting solution to consider. The 2nd screenshot you’re seeing above, reveals just a 40.698 score in AnTuTu.