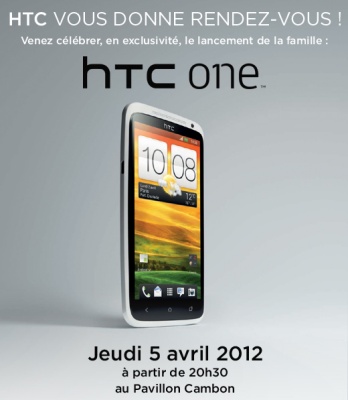 Reports of an April 5 launch of the HTC One X have been coming in for weeks now, so this is pretty much confirmed. The image you see in this article is an invitation posted on the HTC France page, inviting everyone to a Soiree HTC One. This is not only an event for journalists, but also the public and HTC partners, so everyone can join the experience on April 5th. I have to remind you that back at MWC 2012, HTC unveiled 3 new HTC One series devices: One X, One S and One V.

The first is a quad core phone with Tegra 3 CPU and 720p screen, but there will also be a version of it with LTE and dual core Snapdragon CPU, while the One S is the thinnest HTC phone ever, at around 8mm in waist and the HTC One V is a more affordable smarphone, that brings back part of the HTC Legend design. Excited about this debut?