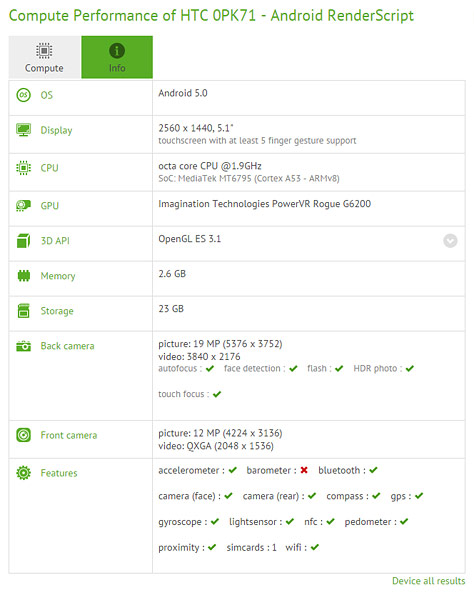 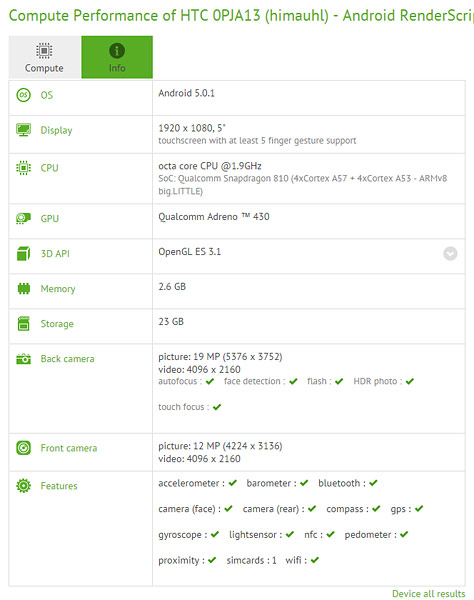 A benchmark called Compubench has leaked the specs of both units, confirming pretty much everything we knew about the devices. Both handsets have almost identical 20 megapixel main cameras, but there are no Duo cameras this time. The selfie cam is a 4 MP Ultrapixel shooter, at least in the last leak, while the fresh one shows a 12 megapixel selfie shooter that is even able to capture 2160p video on the M9.

The One M9 Plus is able to do 2048 x 1536 pixel capture with the front camera and it’s supposed to come with a Quad HD 5.1 inch display, although we’d have expected a bigger diagonal. The benchmark shows a Mediatek MT6795 chipset inside the M9 Plus, accompanied by 3 GB of RAM and a PowerVR Rogue G6200 chipset. The M9 seems to come with a 5 inch Full HD display, a Snapdragon 810 chipset, 3 GB of RAM and the Adreno 430 GPU.

Both models run Android 5.0, have 32 GB of storage, of which 23 GB are available to the user. Meanwhile, we’re also expecting a certain HTC Butterfly 3 phablet with a 5.2 inch Quad HD screen.