HTC One Mini comes as the logical rival of the Samsung Galaxy S4 Mini, a handset I wasn’t very fond of in the review I did months ago. This device was announced in July and launched in August and it is priced at $480 on Amazon, as far as I know. 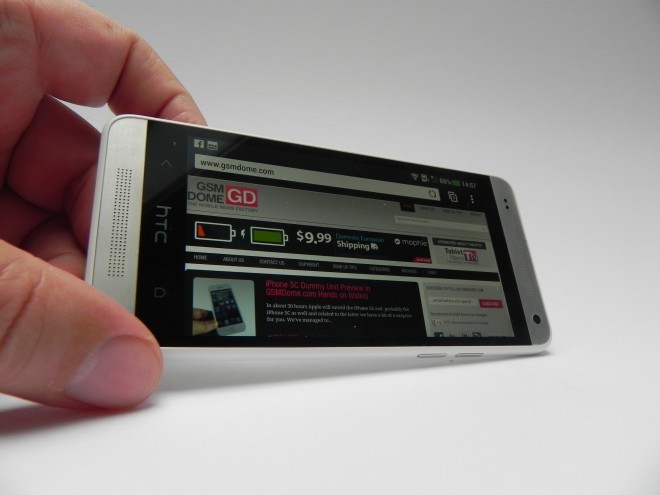 The design shows us what’s basically a smaller HTC One with extra plastic on the edges and smaller front speakers. The device is 9.3 mm thick and weighs 122 grams. Its case is made of aluminum and the device sports volume buttons made of metal, that feel nice when pressed. At the bottom we’ve got a microphone and USB port, while at the top we find the On/Off button, only this time there’s no infrared feature attached to it. There’s also the audio jack in the same area.

At the front we’ve got a front camera, sensors and capacitive buttons below the screen, while at the back there’s the camera with the flash on the side, not vertically aligned like on the HTC One. The handset is slightly curved and it’s nice to use with a single hand. There’s a notification LED hidden in the top speaker and personally I find that its plastic edges decrease the appeal of the design a bit. At least the plastic doesn’t get scratched easily. 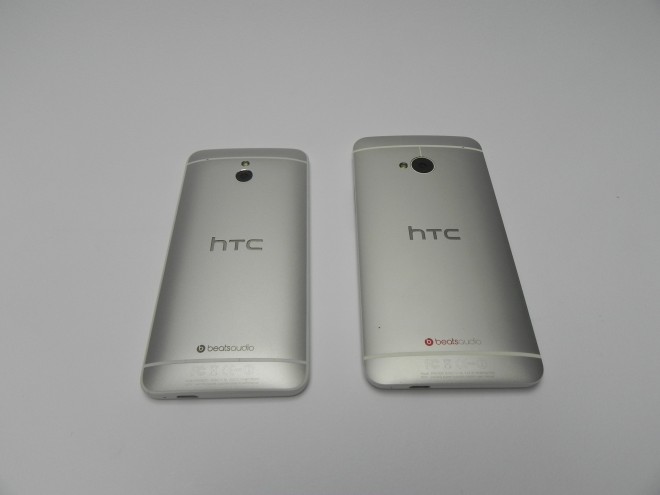 On the hardware side we’ve got a Snapdragon 400 dual core 1.4 GHz processor, the same CPU that was on the Galaxy S4 Mini, but with a lower frequency. The GPU is an Adreno 305 and we’ve got a 4.3 inch display upfront (Super LCD2) with 720p resolution. The screen has Gorilla Glass 3 protection and other specs include 16 GB of storage, 1 GB of RAM and a microSIM card slot.

There’s no microSD here, but we’ve got stereo speakers, Beats Audio tech and a 4 MP Ultrapixel camera with LED flash. Upfront there’s a 1.6 megapixel cam, while on the connectivity side we’ve got quad band GSM/GPRS/EDGE, 4G LTE, WiFi, DLNA, GPS, Glonass, Bluetooth 4.0 and HSPA+. There’s also active noise canceling here, an accelerometer in the mix and a proximity sensor, plus a compass. 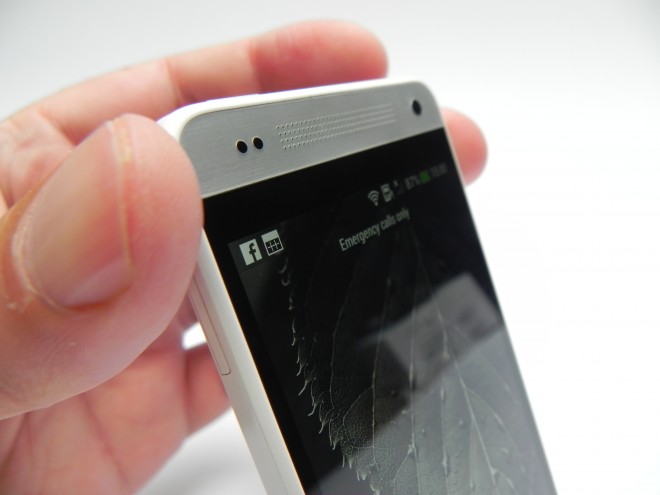 HTC One Mini also brings FM radio to the table, a Li-Polymer battery with a 1800 mAh capacity, that should provide about 500 hours of standby functioning, or 20 hours of 2G talk. Our tests allowed us to achieve 7 hours of YouTube video playback with WiFi on and brightness at 50%, which is pretty good considering nowadays a Nexus 5 gets 4 hours of playback.

For some reason, you’ll have trouble getting one full day of usage from the battery, that’s a bit disappointing. On the audio side, we’ve got an excellent experience, almost on par with one the HTC One provides. We’ve got a huge volume here, very good bass and the earphones are quite comfy to use. BoomSound is still here, amplifying everything, but there’s still no trace of that special EQ I’ve been waiting for. 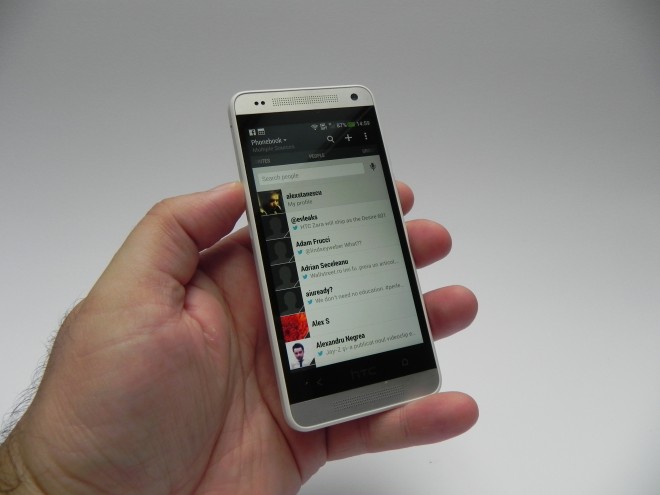 Beats Audio is here, maybe for the last time and we’ve got a nice bunch of audio apps installed. Those include FM Radio, Tune In Radio, Soundhound and 7 Digital. As far as the screen is concerned, there’s a 4.3 inch 720p unit here, a Super LCD 2 with 342 ppi density, accurate colors and good view angles. The white balance is warmer than on the HTC One and the screen is very bright and has an excellent contrast. The brightness hits 390 lux, way above many models on the market and certainly superior to the Galaxy S4 Mini.

As far as the camera is concerned, while the expectations were good, they were certainly surpassed by this shooter. We’re dealing with a 4 MP Ultrapixel sensor, with a size of 1/3 inchers and bigger pixels than the average camera, meaning better low light behaviour. We’ve got a F/2.0 lens here, no optical stabilization like we had on HTC One and an intuitive camera UI. 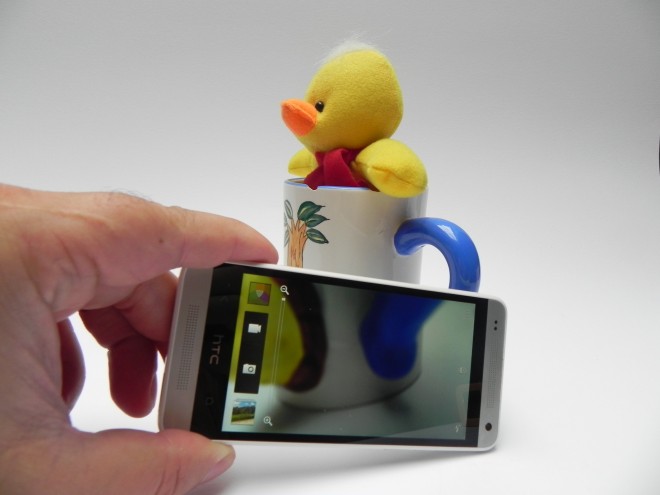 Zoe is present here, as well as a bunch of effects, scenes for both photo and video, slow mo capture, fast capture and HDR. ISO reaches up to 1600, white balance is included as well and there’s continuous shooting here. The result are a bunch of pics with good color reproduction, good brightness, but when you zoom into the day time shots, they aren’t that impressive.

Night pics and videos look impressive, I have to say, certainly beating the likes of the iPhone 5s and Samsung Galaxy Note 3. I must mention that the camera, when filming tends to lose the focus a bit, but at least quality is not hurt when zooming in. Zoe still has those cool previews and it enables to start photo and video capture with 0.6 seconds before pressing the shutter button. 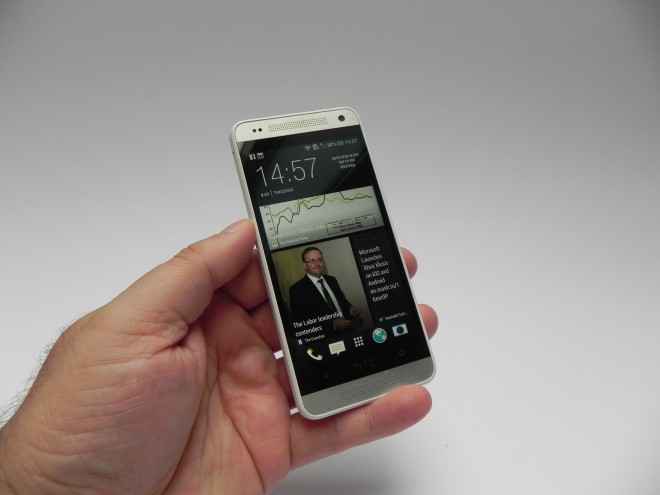 Finally, this camera allows you to film HDR video and the regular videos offer a 20 Mbps bitrate and 192 Kbps audio bitrate. On the software side we’ve got Android 4.2.2 with HTC Sense 5.0 and moving on to the benchmarks, I compared the One Mini to the Galaxy S4 Mini and it won and lost some battles here.

It won in AnTuTu and Vellamo, but in the likes of 3DMark and Quadrant, Samsung Galaxy S4 Mini was superior by 1000 points. The device reaches 35.9 degrees Celsius when you’re gaming, in the center back area, which is pretty OK. Sense 5.0 feels as minimalistic as ever and pretty sober as well. BlinkFeed takes up one of your homescreens, with its news topics and ability to include your social feeds here. 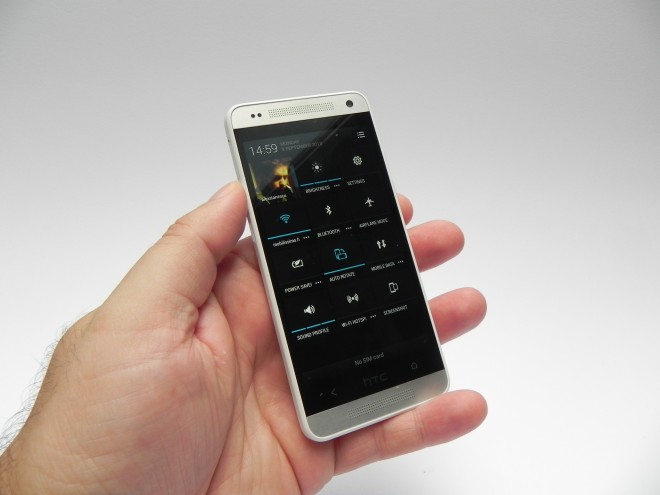 The apps list on the device includes Dropbox, Polaris, Notes, Tasks, voice recording, parental control via a special Dashboard app and a few other media oriented pieces of software. And now for the Pros and Cons…