If you’re a lady searching for a smartphone or a dude trying to get his girl something more than a featurephone, HTC Rhyme might interest you. We’ve previously reviewed the pinky and girly HTC Wildfire S phone, but now this is an entirely different league, since the Rhyme is a phone for ladies, not adolescent teens. 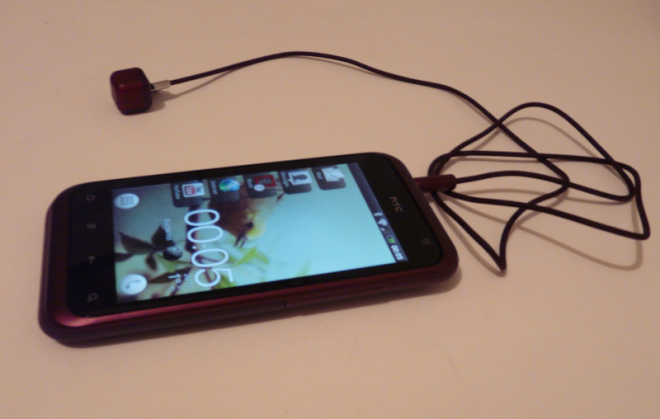 This purple device costs around 500 euro and it measures 10.1mm in waistline, while weighing 370 grams. Its design reminds me a bit of the HTC Incredible models, to be honest. HTC Rhyme comes with a 3.7 inch S-LCD display with a 480 x 800 pixel resolution, 4 GB of internal memory, 768 MB of RAM and an 8GB card bundled with the handset. There’s also a 1GHz Scorpion CPU inside, with Adreno 205 GPU also included, that will generate some pretty nifty graphics, as shown by the videogame at the end of the video review below.

The feminine handset gets HSDPA with 14.4Mbps download speeds, WiFi and Bluetooth 3.0, while the camera section is taken care of by a 5 megapixel sensor, with autofocus, LED flash, geotagging, 720p video capture and a front VGA camera. This 5MP cam is capable of slow motion video capture, in case you’re interesd and this function sets it apart from other modern day smartphones, not that it’s a major achievement. As usual for HTC phones, when filming the camera is crappy when it comes to audio capture, so the mic’s bad. 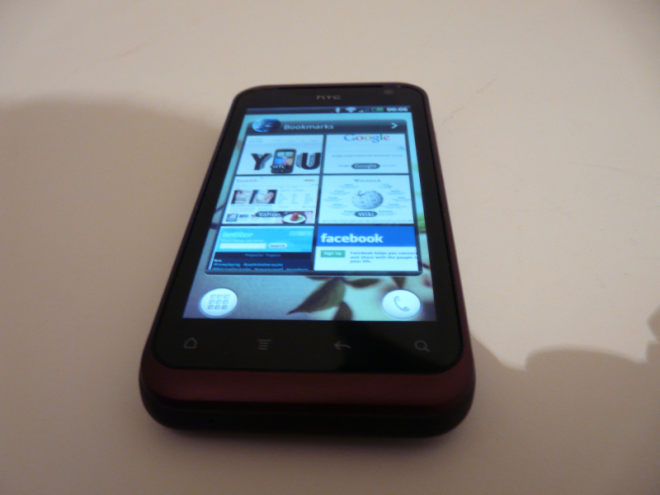 What’s also bad is the set of headphones that comes with the Rhyme, far from the Beats Audio experience one would dream of. They have the texture of Italian pasta tagliatelle, they don’t sit right in the ear and the sound they generate is bad. Moving on with the review, this HTC handset uses a Li-Ion 1600 mAh battery, that provides around or two days of functioning time, with moderate use. The OS of choice here is Android 2.3.4, peppered with HTC Sense 3.5, the latest UI from HTC.

This one is a minor HTC Sense 3.0 evolution and it doesn’t change much in functionality, but it does tweak the look of the OS considerably. Everything gets a gray/purple tint and you get fresh widgets, new skins and scenes to adorn the screen and more. Even the icons for phone calling and apps section have been changed, as has the widget management area. The carousel from Sense 3.0 is still here, but this time it looks more like a hurricane coming towards the user, so the effects are cool.

The widget that you see in the video review, taking up a whole Home screen is an original one, one that allows the user to drag and pull the widget’s four side sections and push them back to view the wallpaper freely. Like I said in the unboxing article, HTC Rhyme comes with a non-removable battery, you’ll only mess around with the back cover if you want to access the microSD and SIM slot. 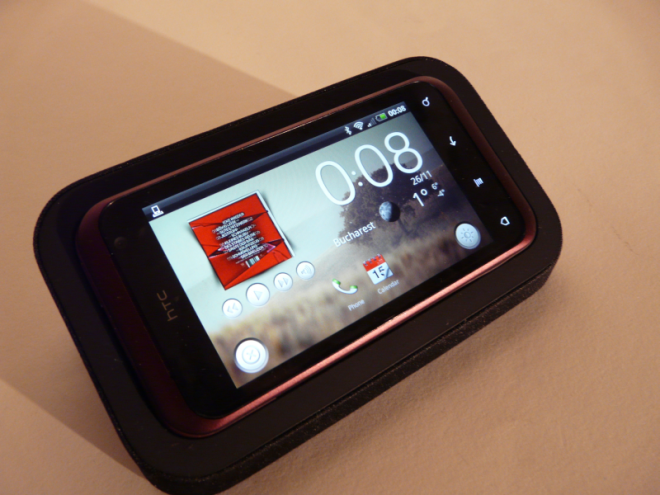 And finally we’ve reached the accessories, possibly the reason why so many ladies are crazy about this purple phone. The device comes with a dock, that allows wireless charging and also includes a bunch of speakers that enhance the audio experience of the smartphone. There’s also a special dock mode, that when activated, displays the music player, time, weather, call icon and calendar. The Dock mode is great for video viewing, to be honest and the whole concept of docking really got to me.

Another nifty accessory is the Charm, with an audio plug inserting into the jack on the handset and the other end holding a little purple cube, that lights up when you get a call or text. The lighting will continue for about 5 minutes after the phone, so when you dangle the Charm outside your purse, you’ll know that you have a missed call. Silly, right? Yes, but also kind of cute…

The handset is very elegant in shape and it even has those little details that make it nice, like the small cover of the microUSB port, the tiny contacts for the dock near the camera and the discrete stopper of the Charm plug, that doesn’t allow the plug to spin around. All of these, plus the feminine accessories, the color and some feminine apps you’ll download if you want make this phone a solid purchase for a damzel.

Of course, the single core CPU and not so much RAM are felt from time to time and the lag might spoil your experience, but in the end the handset will grow on you.