We’ve already reviewed the HTC Titan Windows Phone device and the HTC Sensation XE, so we wouldn’t mind when a combo of the two arrived on our doorstep: HTC Sensation XL. This 4.7 inch smartphone packs the same specifications as the HTC Titan, for the most part and also adopts the Beats by Dr. Dre headphones from the Sensation XE, bundled with the package. Now let’s see if this single core unit is any match for other Android phones out there with big displays. 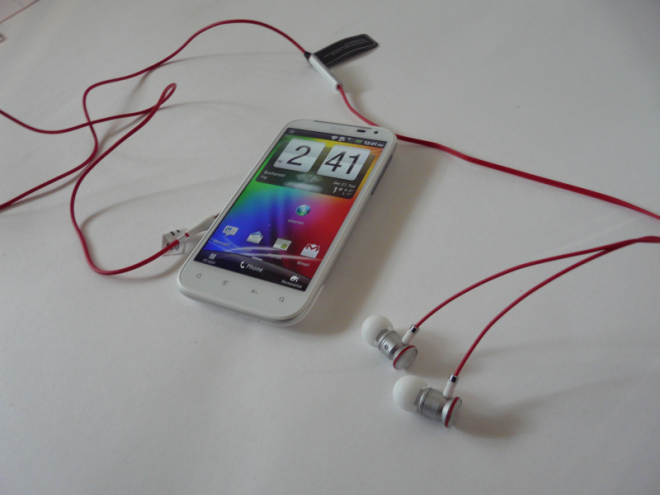 HTC Sensation XL measures 9.9mm in thickness, weighs 162.5 grams and features a 4.7 inch S-LCD screen with the disappointing resolution of 480 x 800 pixels. The smartphone packs a 1.5GHz Scorpion processor of the single core kind and there’s also an Adreno 205 GPU in the mix, for your gaming pleasure. Sensation XL also features 16GB of internal memory, 768MB of RAM, HSDPA 14.4Mbps connectivity, WiFi, DLNA and Bluetooth 3.0. The OS of choice here is Android 2.3.5 plus the HTC Sense 3.5 interface, the same I’ve seen on the HTC Rhyme, that doesn’t bring many modifications to the way the OS looks like.

HTC Sensation XL features an 8 megapixel camera, with autofocus, dual LED flash, geotagging, face detection, touch focus, HDR, slow motion capture and 720p video capture as the maximum setting. Continuing the list of hardware specs we find FM stereo radio, the Beats Audio headphones that can easily be attached to the phone’s 3.5mm audio jack and a Li-Ion 1600 mAh battery with enough juice for 7 hours of talk time and about a day of normal use. So, as you can see we have the same camera, CPU and display as the ones on the HTC Titan… One big flaw here (and on the Titan) is the lack of a microSD slot, for people who want more storage… 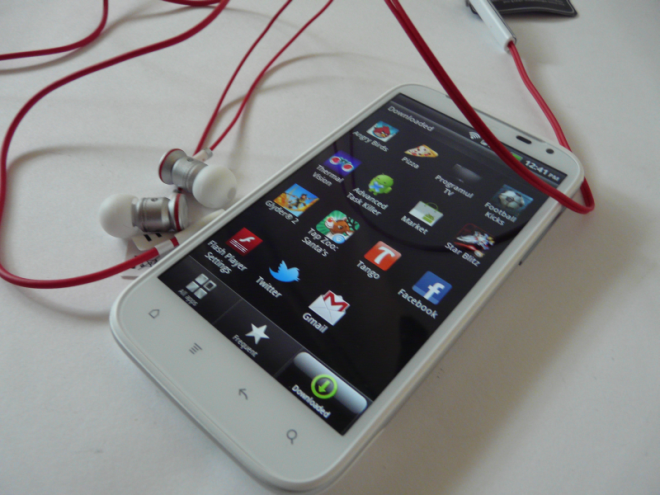 I have to say that the screen is pretty bright in spite of being a mere S-LCD and also its colours are vibrant, although at times that brightness seems a bit exaggerated. The phone’s design has changed from the first Sensation and the Sensation XE, so we don’t have an exterior shell that protects all components and includes the antenna of the handset. Now, the case is a mere battery cover, but removing it still leaves the smartphone without WiFi signal, so there must be some antenna included in that removable area. Well, at least death grip seems to be gone, an annoying attribute on the HTC Sensation and Sensation XE.

The thing that bothered me the most is that the combo between plastic and metal used on this handset’s chassis leaves some spaces between materials and some naked areas that undermining the quality of this phone’s design. There are parts of the phone where the case seems “cracked”, so to say, because a space is lacking among two chassis parts. Moving on to the software side, the experience is vastly similar to the one on the HTC Rhyme, since the HTC Sense version 3.5 is the same and Android 2.3.5 is also present.

All you get is a bunch of new widgets, a new arrangement for the widget/app area and new UI for the camera, that doesn’t change much aside from icons and aesthetics. Dropbox comes preinstalled on the handset, there’s also HTC Watch, a reader app for a great e-reading experience on the huge screen and the usual Friend Stream option for social networking. This function and widget allow you to check out what people are saying on Twitter and Facebook and you can also update your status if you want to. 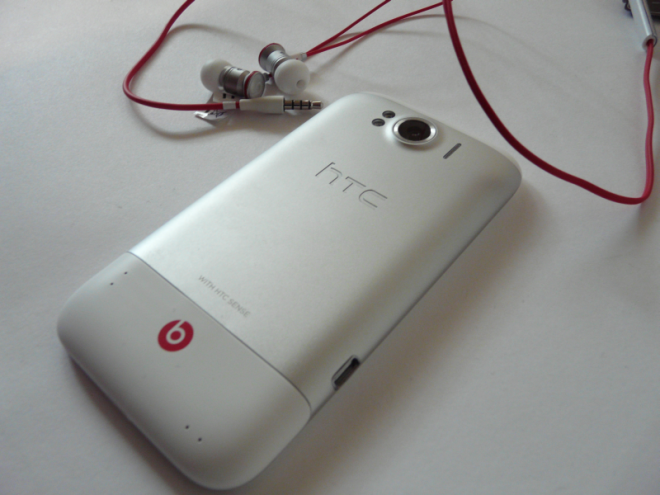 The new Sensation model provides quality phone calls and also a pretty good audio experience, both courtesy of the included speaker and the Beats headphones. These trigger a special Beats Profile, that gives you extra bass, useful in hip hop and rock songs and not so much in acoustic guitar music. Just like I said in the HTC Sensation XE review, I would have wanted a special Beats app, with tons of equalizer options, but that may happen in the future considering HTC and Beats by Dr. Dre are an item now.

Video playback is great on the huge display, although you shouldn’t expect any 1080p mkv love here. At least the diagonal is big and colours are vibrant. On the camera side, the capture is great, photos look detailed and colors are nice, but the video capture could have been better. The slow motion option is a nice addition, but you’ll never actually get to use it, unless you want to make a fun video of a dog running in slow mo, but this is a video mode with a mere 2x slowdown, so there’s not a big difference.

Since this is a single core device, lag is to be expected at some point, especially when messing around in the menus with many live widgets open and probably an app or two left running in the background. The games that work on this handset look great on the huge display, so if you want to take advantage of those 0.99$ Gameloft HD titles be my guest, since they own on this device. Overall, this is a huge smartphone, not one that you’d like to hold in the pocket of your jeans and certainly an item you’ll feel that you’re carrying in your purse. It’s available in white for starters, a color version that many top handsets only received weeks or months after they were launched.

If you want a solid device I have to admit that the HTC Titan is a better choice, since it’s more stable and it doesn’t have problems with lag. HTC Sensation XE is also better, since it’s got a faster processor, so we’re left with the HTC Sensation XL as the black sheep of the latest HTC smartphones. I don’t like the way its materials are included in the case, the display resolution, the lack of a microSD card, the camera options, the UI is not that changed and I certainly don’t like the lag. What I do like are the vibrant colours, the size of the display (when watching movies), the quality of the pics taken with the camera, the widgets/skins and customization options and the Beats Audio experience.