Close to last year’s end we had the opportunity of playing with the Motorola Droid RAZR, the thinnest smartphone available internationally. This is a 7.1mm handset that has in the meantime been beaten in the thickness area by some Japanese phones, that will probably never leave the country, so Moto’s title is safe. Motorola Droid RAZR is certainly a wide phone and it’s got that nifty kevlar back, but can it withstand the bullets of our criticism? Let’s see… 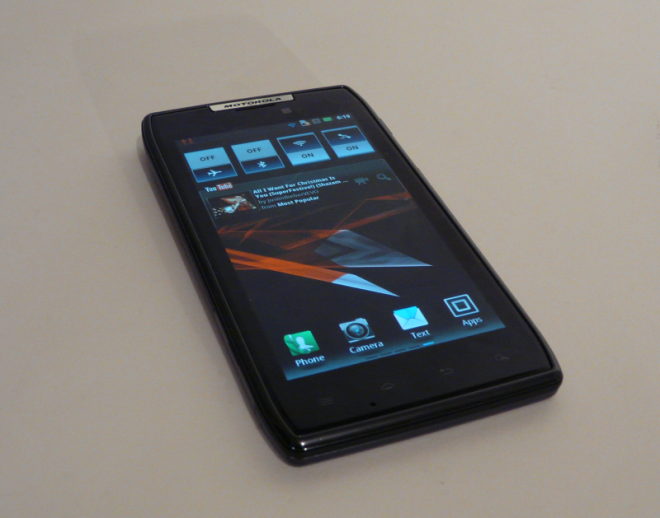 For starters, the 7.1mm smartphone weighs 127 grams, so it’s not the lightest phone we’ve reviewed over the past months. It comes with a bright 4.3 inch Super AMOLED display with 540 x 960 pixel resolution and Gorilla Glass protection. There’s also 16GB of internal memory in the mix, 1GB of RAM and a microSD card slot among the specs. WiFi, DLNA, Bluetooth 4.0, AGPS and HDMI are all available here, integrated into the fancy machine.

The brain of the new RAZR is a TI OMAP 4430 dual core processor with 1.2GHz frequency, that will be excellent for running Android 4.0 Ice Cream Sandwich when it’s launched as an update for this phone. For now we’re happy with Android 2.3.5, in a version customized by Motorola and with a bunch of flashy effects and transitions in the UI, especially when moving from one home screen to another. Back to the device’s feats, we also get noise canceling technology and an 8 megapixel camera, with autofocus, LED flash, touch focus, image stabilization and 1080p 30 fps video capture

There’s also a 2 megapixel camera at the front with 720p video capture and a 1780 mAh Li-Ion battery powers up the joint and provides about 12 hours of talk time and about 2-3 days of functioning time. I didn’t forget the back of the handset, with its kevlar weaving, that apparently keeps the handset safe from some shocks and a bit of water splashing. I have to say I’m a bit jealous after finding out that in China there’s a version of this phone with a 13 megapixel camera and a 720p display, so I look forward to seeing that upgrade in Europe and the USA as well. 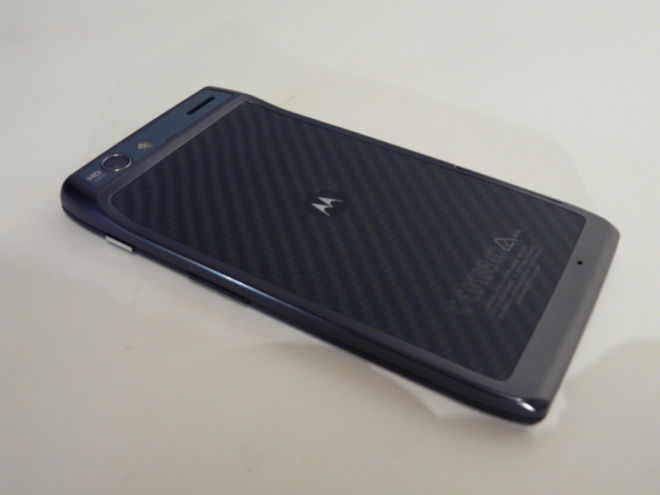 The screen on this device is a Pentile Matrix and overall the 256 ppi it gives is lower than the Galaxy Nexus, if you want a comparison. As far as software goes, the classic Gingerbread experience is here, with the notification bar, lots of special widgets from Motorola, new icon designs, Motocast used for media streaming and a social networking widget that doesn’t look as good as the rivaling functions from HTC and Samsung, for example.

The thing I loved the most about this phone is the Smart Actions area, that allows you to program stuff to happen when certain actions triggers them. For example, you can set your Motorola Droid RAZR to change wallpaper when it senses that you’re in the location marked Home in Google Maps. Also, when you reach Home, it may switch to a silent volume profile or start the WiFi, or anything you want it to do. Thus you can create your very own little robot, doing pre programmed actions for you.

As far as multimedia goes, the video playback and audio playback are top notch here, as shown in the video review below. You’ll also have a ball playing videogames courtesy of the potent processor, but with this resolution a bunch of titles won’t be available. The camera is also pretty good, although video capture could have been a lot better and there seems to be a problem with audio capture when filming, since the result didn’t satisfy me at all.

The device may feel extremely wide in the user’s hands, which I can say it’s yet another flaw, but considering this model is even thinner than the Samsung Galaxy S II, you’ll skip this aspect. Keep in mind that the phone is available in a LTE version on Verizon, so you’re getting the best in connectivity with a contract of something around $199 or so. There are many LTE models to choose from right now, including the HTC Rezound and Samsung Galaxy Nexus.

It’s either the slim design of the new RAZR or the hardware power and cool displays of the newcomers… What would you choose? I’d wait for the 720p upgrade of the Droid RAZR or maybe for the version with QWERTY keyboard, the Droid 4.