After the iPhone 4S review, it’s time to have a look at something bigger, actually the biggest smartphone on the market right now. I tell you, this thing is almost like a ping pong pallet and it’s very hard to use with a single hand, because of that giant 4.7 inch display. Now let’s how good is this first Windows Phone Mango device. 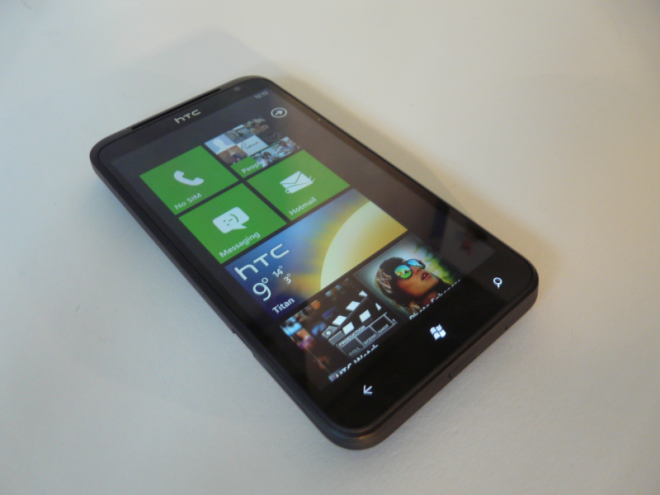 This is a very fresh device, that was launched in October and it’s starting to be available internationally. The first thing you’ll notice is that this huge phone is actually lighter than it looks, at 160 grams. It’s also pretty thin at 9.9mm, once again for that huge 4.7 inch display. And what a pity that the screen supports only 480 x 800 pixels as the resolutio0n, considering we have 720p handsets out there. However, HTC must stay true to the Microsoft requirements for the Mango platform, because we know the Taiwanese are able to do a 720p phone, since they did it with the Rezound.

My first impression of the HTC Titan is that it’s a very easy to use handset… I’m a WP7 user myself, so having the OS available every day helped with the experience. This was my first contact with Mango OS, but I didn’t feel that the experience was greatly upgrade. It’s true, we have multitasking by pressing the Back button and holing it, we have IE 9 with hardware acceleration and a strange placement of the address bar at the bottom and much more.

Bing Vision and Music didn’t quite impress me, since I could have lived without them and there are apps with those features, that certainly require less data transfer. I admit that it’s hard to impress me once I’ve seen an iPhone 4S and Samsung Galaxy Nexus in action… Also, the specs of the HTC Titan aren’t all that impressive, as the device comes with a S-LCD, Dolby Mobile sound, 16 GB of storage, 512 MB of RAM, HSDPA, WiFi, DLNA and an 8 megapixel camera. 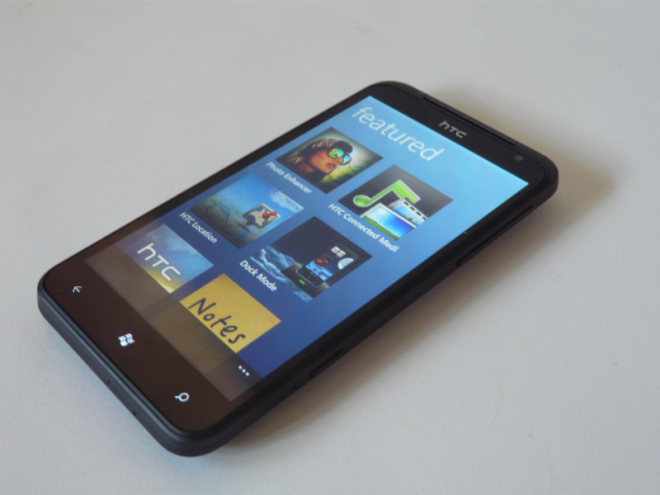 There’s also Internet sharing as function included in Mango OS and the 8MP cam I mentioned actually works fine. The pics look great, but there’s a certain hissing noise when you do video capture at 720p. There’s also a secondary camera at the front for videocall, something that you’ll find on this new generation of Mango phones. The brain of this smartphone is a 1.5GHz Scorpion processor, accompanied by the Adreno 205 GPU that you’ll see in action at the end of the video review below. I’m talking about that car stunt game, that’s actually pretty good Xbox material.

The huge phone also has a huge battery, a Li-Ion 1600 mAh unit, that should provide about 12 hours of 2G talk time and plenty of standby. If you’ve used a WP7 device before, you’re probably aware of the fact that they don’t usually eat up too much battery. That is, if you know how to sync and set up everything so that your online services won’t download data all the time. The social networking section of the device now also includes Twitter syncing, not only Facebook, so Twitter integration is trendy, since it made it to both iOS 5 and Windows Phone Mango.

HTC Titan also brings Office 365 syncing, more dynamic tiles and all the goodness one can gat out of Mango. Obviously, we have specific HTC apps and the HTC Hub, with weather, news and other info included. There’s also a Photo enhancing feature, that doesn’t mean much if you’ve ever tested the Photoshop Express app on Android. Choosing the Titan over a newer Android or iOS model is a personal option, to be honest and for me this HTC smartphone simply doesn’t cut it.

For one, the device doesn’t fit in the pocket, it can’t be used with a single hand and the huge app list is annoying if you try to search for a certain app and you’re too lazy to type during the search. The videos and music look and sound great on this handset, but that resolution is a real buzzkill… Does the Titan sound better than the Lumia 800 to you? To me it doesn’t…