Since we’ve now got the HTC Desire C as the lower end offering from HTC in 2012, why not make the “C” a series of sorts? Well, now the HTC Ville C just leaked, confirming that we’ll have at least one or two more C devices. This time we’re dealing with a slightly dumbed down HTC One S, as shown by the leak below. 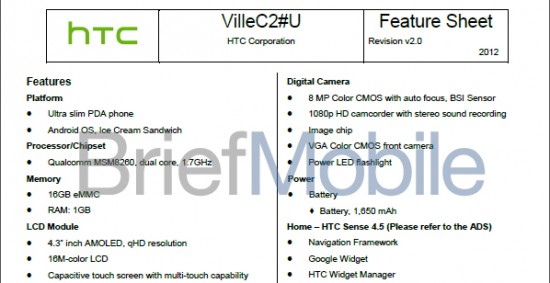 The folks of Brief Mobile received the info from a tipster and you should keep in mind that the CPU frequency mentioned below is actually a typo, so no 1.7 GHz processor here. Most of the specs of the HTC One S were kept, but some were also altered, so we get a 4.3 inch qHD display (AMOLED), 16GB of storage, 1GB of RAM and a Qualcomm S3 dual core CPU (MSM8260) from 2011. The HTC Ville C is also expected to pack an 8 megapixel camera, front VGA shooter and a build quality that’s a bit lower than the one of the One S.

Thus, it will come with the standard aluminium chassis, so without the micro arc oxidation trick up its sleeve. There will be no ceramic feeling on the case, which might be a good thing since the One S tends to slip from the user’s hand once or twice because of this material.