An internal T-Mobile document has just leaked online, exposing a couple of future devices that will reach the carrier’s portofolio. Some of these names you’ve already heard of, stuff like HTC Ville and Samsung T769, while he Huawei Prism, also on the list is a mystery at the moment. I must say that the devices aren’t mentioned per se in the leak, but rather their accessories. 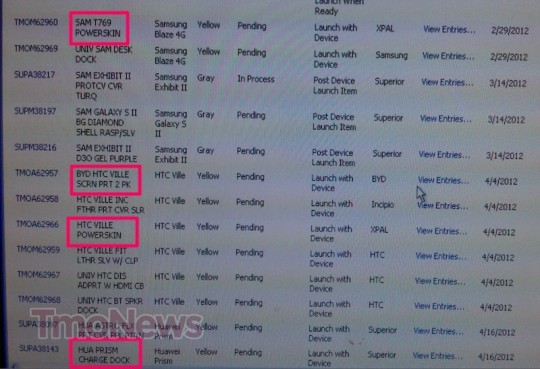 Samsung T769 is an older acquaintance of ours, the Samsung Galaxy S Blaze 4G, while the Huawei Ville was rebranded to HTC one S last I heard and it was coming to MWC for a full showcasing. The Huawei Prism doesn’t ring any bells, so it could be the recently teased quad core phone from the Ascend line. Sadly we have no specs or launch dates to give you, aside from the screenshot from the carrier’s system. It’s nice to know that T-Mobile is preparing to receive handsets that will debut at MWC, but we’d like something more solid than leaks.

For one thing, images would be good, then hardware features and some prices, with or without contract. All of that and much more will be detailed once we hit the MWC floor, as we’re getting ready right now to embark on a plane to Barcelona and enter the gates of MWC.