We tested earlier this year the HTC Windows Phone 8x aka HTC 8X and now it’s time to give the HTC 8S a spin. This midrange model is a smaller version of the 8X basically and it’s also more affordable, being priced at about $325 off contract. 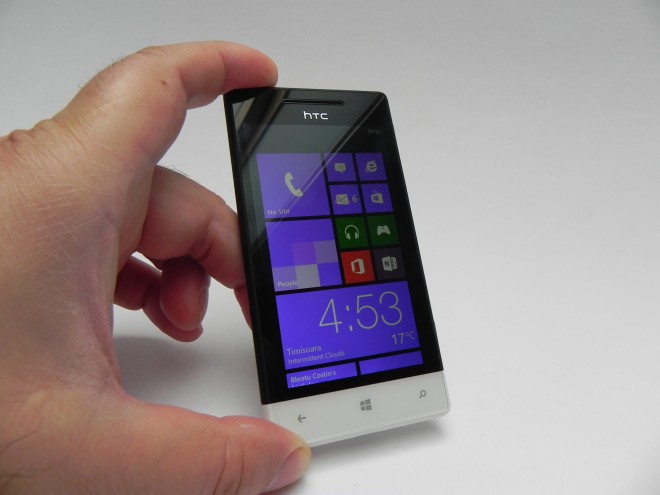 The handset comes in black and blue, plus a few other hues and it’s a bit curved like the HTC 8X. It measures 10.3 mm in thickness, weighs 113 grams, that makes it pretty light and while it may seem thick, the curved shape saves it from that allure. We’ve got a lid at the bottom of the phone, one that covers the microSIM and microSD card slots and I already have to object on one aspect: the way the capacitive buttons light up through the white plastic: it feels cheap.

We’ve got a nice soft touch back area and a design that I truly like, even compared to some Nokia Lumias. HTC 8S comes with a polycarbonate body, it has good build quality and the dual color setup is pretty interesting. The phone is also pretty easy to use with a single hand. As far as hardware goes, this phone comes with a microSIM card slot, a SLCD 4 inch display with 480 x 800 pixel resolution, Gorilla Glass protection and a 233 ppi density. 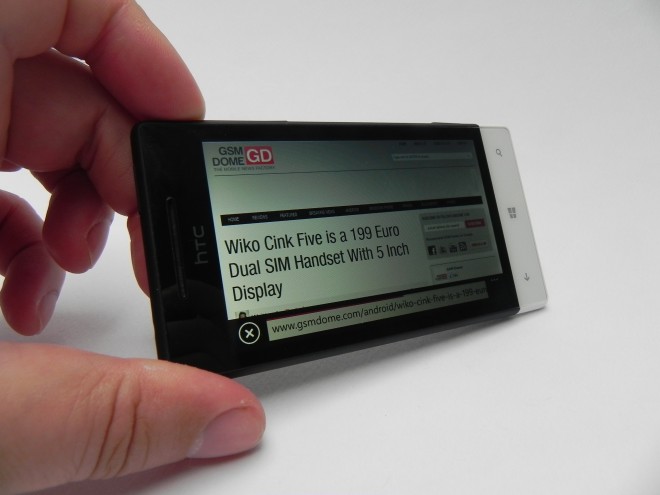 We’ve also got Beats Audio technology on board, a microSD card slot, 4 GB of storage, of which 1.5 GB are free and 512 MB of RAM. There’s also HSDPA connectivity on board, WiFi, Bluetooth 3.1, a 5 megapixel camera at the back with LED flash and a Snapdragon S4 dual core CPU inside at 1 GHz. There’s also an Adreno 305 GPU in the mix, as well as an accelerometer, proximity sensor, GPS, Glonass and finally the battery is a Li-Polymer 1700 mAh unit, that should provide about a day of regular use. It’s certainly better than the Lumia 820 battery… 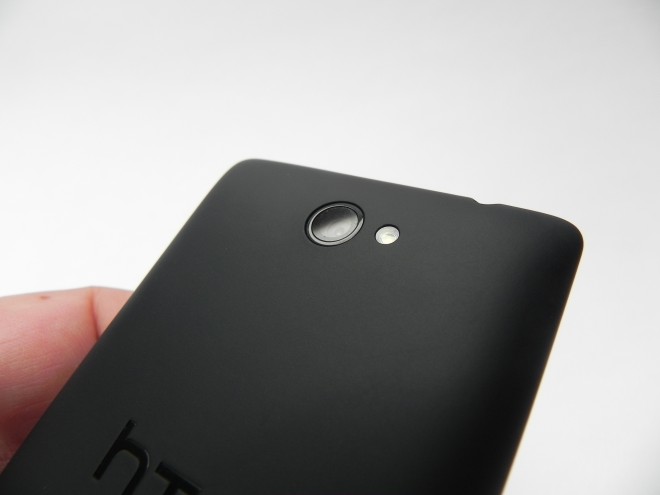 Moving on to the audio side of things, the headphones bundled with the handset may be ugly and uncomfortable to use, but they are pretty loud. As far as the speaker goes, we’ve got a clear sound, good voice, nice bass, no distorsion, but I would a hint of volume more. Beats Audio can be activated from the settings, for a pinch of bass more.

As far as video goes, the 4 inch Super LCD 480 x 800 screen has good brightness, decent sunlight behaviour, so so view angles and a Non Pentile RGB setup. The colors are pretty vivid, the contrast is nice and next we move on to the camera. This is a 5 megapixel shooter, with LED flash, no macro feature, 720p video capture and there’s no front camera here, in case you’re wondering.

The camera uses a 35 mm lens, has F/2.8 aperture and it’s basically the same camera as the one from the HTC Desire X handset. You can tap to focus, you can tweak the ISO, white balance, exposure and apply some effects. You must have a steady hand if you want to actually take some nice shots with this camera. The contrast of the pictures is good, but they’re a bit oversaturated.

We’ve got continuous autofocus always activated here and weak video stabilization, these two being two of the camera’s flaws. The video capture results in clips with 8 Mbps bitrate, which is much less than some 2012 Lumias even. The browser of the handset is reasonably fast and the only customization that HTC brings on the software side is the HTC Hub. Sadly, there’s no smart dialing here, a major flaw of the phone if you ask me. 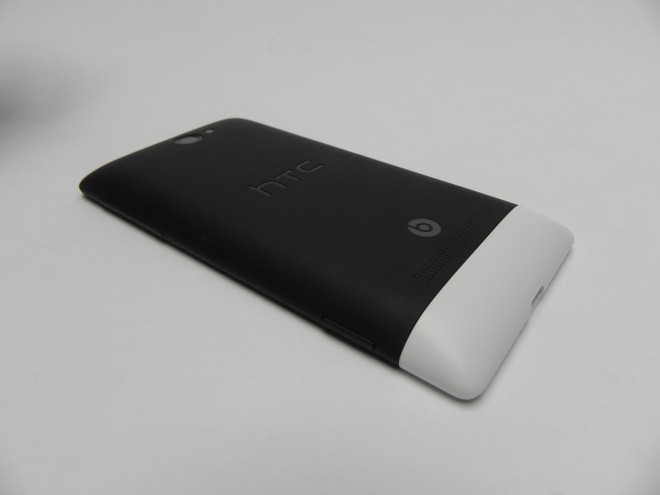 The call quality is good and as far as benchmarks go, the device’s scores are actually pretty poor, with about half the score of the Lumia 820 in AnTuTu and 300 points less in Browsermark. SunSpider brings us a higher score, which is actually bad, since the lower the better here. We’ve also shown you the Photo Enhance app and Office software in the video review below.

And now here’s a list of Pros and Cons regarding the phone.

And here are the Cons:

We give the HTC 8S an 8.7 for design, a 7.9 for hardware and a 7 for OS and UI. The final grade is 7.86 out of 10 and this phone is pretty mediocre on the software and even hardware side, but that price you can compromise I guess.