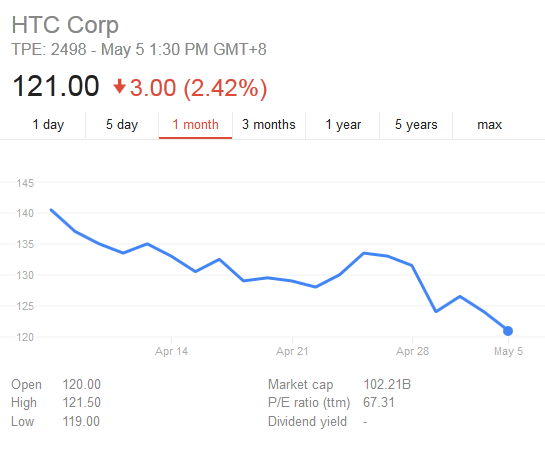 HTC registered a drop in revenue of almost 40% in April, as analysts claim that the thermal issues of the Snapdragon 810 made buyers cautious about the HTC One M9. HTC got a revenue of $439.95 million for the past month, which is 40% less than what they got last year in April.

The amount is also 32.36% less than what the company made in March this year. Analysts blame it all on the HTC One M9 and overheating worries, but one would expect the midrange HTC models to save the day. As you can see above, the HTC stock value also dropped a lot over the past month, as the company has been plagued by restructuring and bad PR for its flagship.

They managed to salvage the situation with the HTC One M9+, but that model hasn’t been sold widely just yet. Then there’s the E9+, also appealing in its own way, but only limited to the Asian market for starters. For the whole of 2015 expectations are that HTC will ship 4.5 million units of the One M9, compared to the 7 and 8 million models of the M7 and M8.