T-Mobile has been preparing the next myTouch model for a while now, working with Huawei. The model, known as the Ascend G312 has just reached the FCC and according to the label location diagrams supports HSPA, UMTS, GPRS, GSM and Edge. We have no idea if this Huawei U8680 (codename) is the QWERTY phone that was spotted at the company’s HQ a while ago. 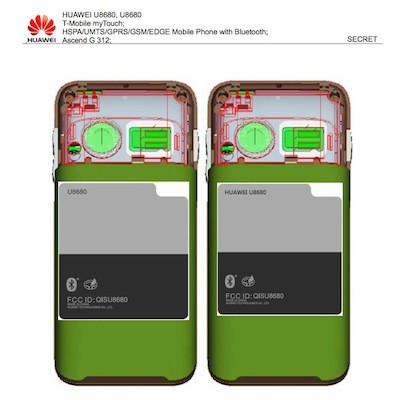 That leaked Huawei had a 4 inch WVGA display, Android 4.0 ICS, a 1.4GHz Qualcomm MSM8255T SoC, 1GB of RAM and 4GB of on board storage. No idea when T-Mobile will debut the myTouch and last I saw it in a leak, it looked like a device with a cheap case. This is a non QWERTY model that’s supposed to run Android 2.3.6 and it seems to be a midrange handset. Leaks also point towards a 5MP camera with autofocus at the back with LED flash, VGA front camera and support for 850/1700/1900 UMTS bands.