The Huawei Ascend W1 got a semi-launch at CES 2013, when it was spotted there randomly, but the device wasn’t exactly detailed by its maker. We’re dealing here with a Windows Phone 8 unit, that is supposed to go on sale soon and this is a pretty late arrival to the Windows Phone game, with Huawei being a Microsoft WP partner a long while ago. 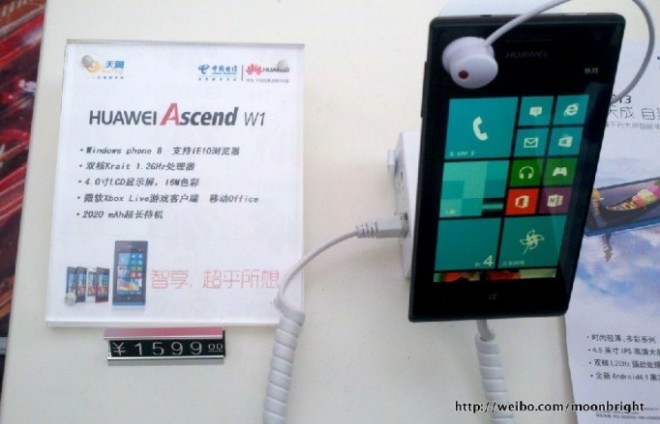 Today we also learn a price for this newcomer, courtesy of a photo snapped and posted on Sina Weibo, a Chinese social networking site. The price tag of the phone is $258 and this is merely the “asking price”, so retailers and carriers may take it even lower. The Ascend W1 may end up being the cheapest Windows Phone 8 smartphone on the market by the time it launches. Of course, I’m sure Nokia will retaliate with a Lumia with similar specs and pricing, but that will happen later.

Huawei is so confident in this product that they asked the factories to manufacture 500.000 units of the Ascend W1 for the first batch. Let me remind you that we’re dealing here with a 4 inch handset, with a 480 x 800 pixel resolution, a 5 megapixel camera, a dual core Qualcomm Snapdragon 1.2 GHz CPU, Adreno 305 GPU and 4 GB of storage, plus microSD.