Huawei just started sending media invites to an upcoming “beauty event” in London, that will mark the unveiling of their latest smartphone. The event will take place on June 18th and it seems to be related to beauty. 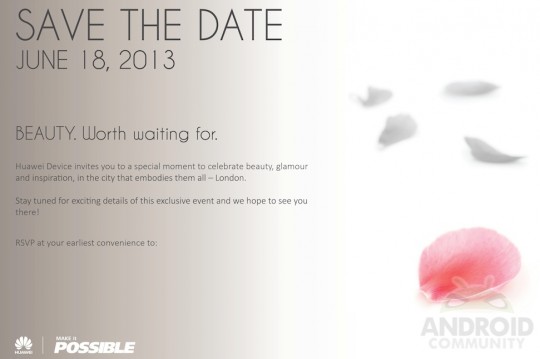 The Chinese company behind it has been pretty quite over the past months, when it comes to launches. After releasing the massive 6.1 inch phablet Ascend Mate at CES they didn’t release anything else. Rumors have been floating around, concerning an in house built 8 core Cortex A15 processor, an alternative to Qualcomm and Exynos. Although I doubt we’ll see Huawei putting out an 8 core handset, they will probably be showcasing “the world’s thinnest smartphone”.

Over the past days we’ve seen a bunch of pictures of the Huawei P6 handset, with its beautiful brushed metallic shell and we’re also expecting the thin and all metal Huawei Honor 3. It could be that the London event holds more than one phone for us, but that remains to be seen. This summer just got more heated… For one thing, I’m sure that the new device will have a 13 MP camera and 2 GB of RAM, plus a 5 inch display.