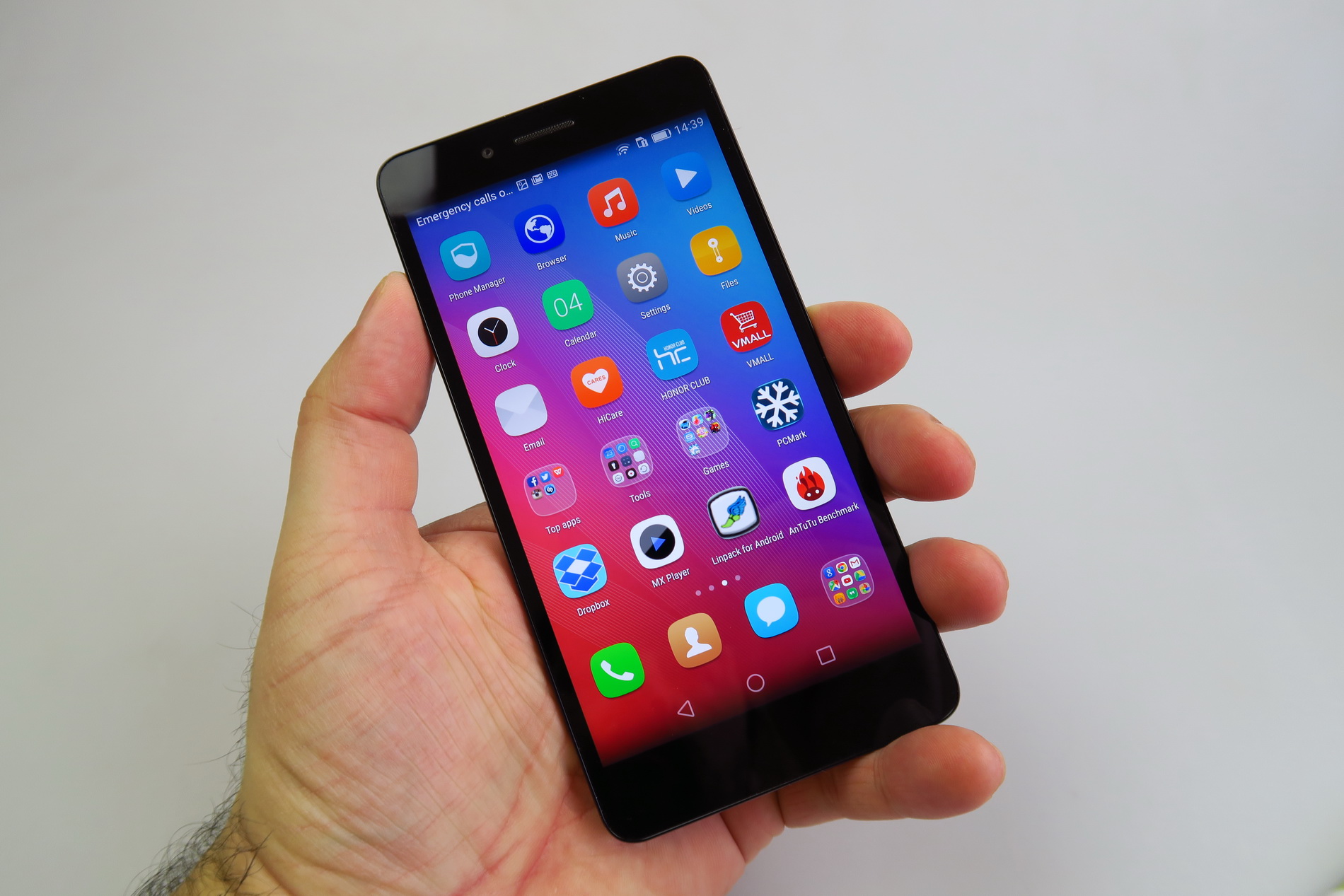 Huawei Honor 5X came to us like the follow-up of the already excellent Huawei Honor 4X, that we liked a lot when we reviewed it. The 5X was launched in November 2015 and this it’s a metal midranger from Huawei, priced at a mere $200 on Amazon. It was very high praised at CES 2016 and gets detailed in the review below. 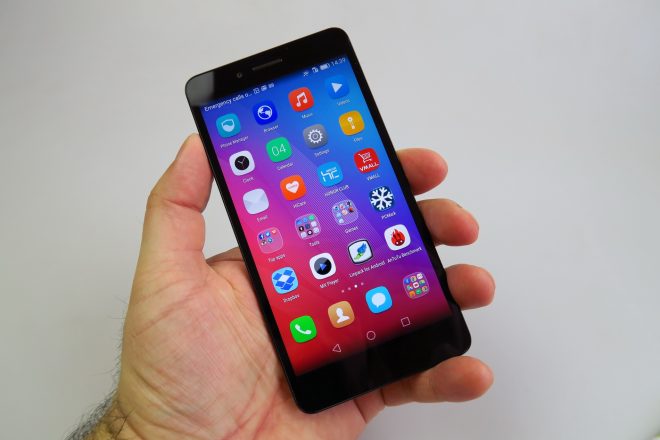 The design involves an aluminum alloy shell, that measures 8.15 mm in thickness and this model weighs 158 grams. This means that it’s 0.6 mm slimmer than the Honor 4X and also about 7 grams lighter. In spite of being more compact, it keeps the same 5 inch diagonal as the predecessor, which is 5.5 inches. It’s quite a long phone, that’s hard to use with one hand.

It does provide good grip, a premium build and the front side looks like the 4X a lot, plus the Huawei P8 a bit. It’s a comfy handset, with two plastic windows at the top and bottom of the back, for the sake of antennae. The buttons are comfy and this one is an elegant and nicely design device, a surprise for its price. 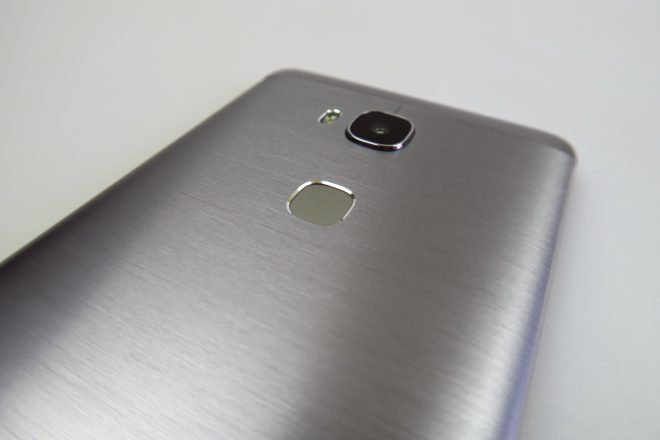 As far as the display goes, we’ve got a 5.5 inch IPS LCD panel in the mix, with a Full HD resolution and an upgrade from the 720p screen of the predecessor. The big bezel is kept and the video player on board comes with a pop up play feature and play speed option. The viewing experience involved good brightness, but the colors felt a bit oversaturated.

Contrast was OK and we got wide view angles. Pixels are of the RGB Stripe variety and the luxmeter showed us a value of 482 LUX, which is quite good and above the Huawei Honor 4X’s 430 LUX, or even the Huawei Mate 8’s 423 LUX. In the Settings section we get to set up the color temperature (warm, cold), font and increase readability. 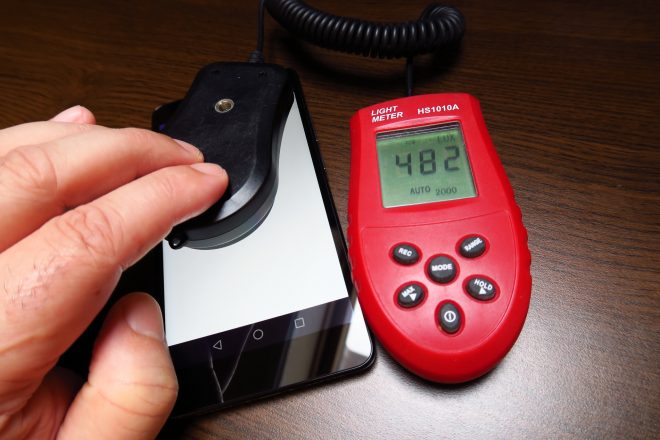 The CPU inside is an octa core Qualcomm Snapdragon 616 unit, with an Adreno 405 GPU, a capable unit we’ve seen on many midrangers. It’s accompanied by 2 GB of RAM, 16 GB of storage and a microSD card slot. The usage experience felt less fluid and fast than the Huawei Honor 7, if we’re being honest. Apps also seem to start up a bit slower, but the games run OK.

The benchmarks are superior to the ones of the Galaxy A7 (2016), which is quite a feat and we also beat the Lenovo Phab Plus, while at the same time scoring below the Huawei P8. Performance was good for the price range in which we move and the temperature only got as high as 36.3 degrees Celsius, after 15 minutes of playing the game Riptide GP2, so there’s no overheating. 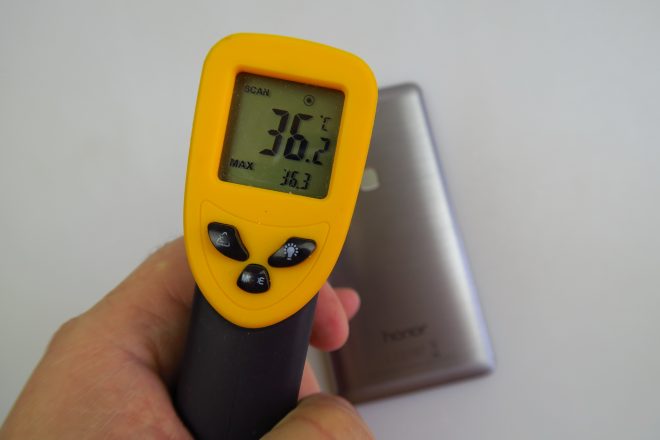 On the acoustics side of things we get a smart power amplifier and a typical EMUI music player, with a simple UI. As usual, in spite of having two grilles at the bottom of the phone, only the right one is the speaker. The volume was OK, but I’ve heard louder, while the bass was at a mid level and we felt a slight distortion at top volume.

The decibelmeter test revealed a value of 80.5 dBA, which is underwhelming and scores below the Huawei Honor 4X’s 83.9 dBA. At least, it surpasses the likes of the Sony Xperia Z5 Premium, right? The headphones are the same affair we got on the Huawei P8, Earpods-style, with a high volume and good isolation, plus not being very comfy sadly. 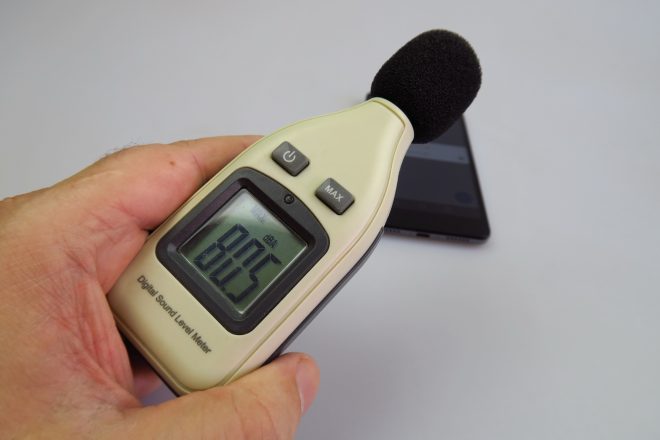 The EQ is stock and we also get FM radio. As far as the camera is concerned, Huawei Honor 5X packs a 13 megapixel shooter with F/2.0 aperture and 28 mm wide angle lens. There’s a 5 MP shooter upfront with F/2.4 aperture and a 22 mm wide angle lens, plus 1.4 micron pixels. The camera app starts up slowly and comes with features like All Focus, Slow Motion, Good Food and Perfect Selfie, as well as Effects.

The capture experience involves fast focus, fluid zoom and fast capture in general. The gallery of shots taken during the day came up during a sunny day in April and brought realistic colors, good clarity and OK details when zooming in. We had very nice flower closeups and good selfies, actually fantastic selfies, perhaps the first that really managed to digitally render my skin pores. 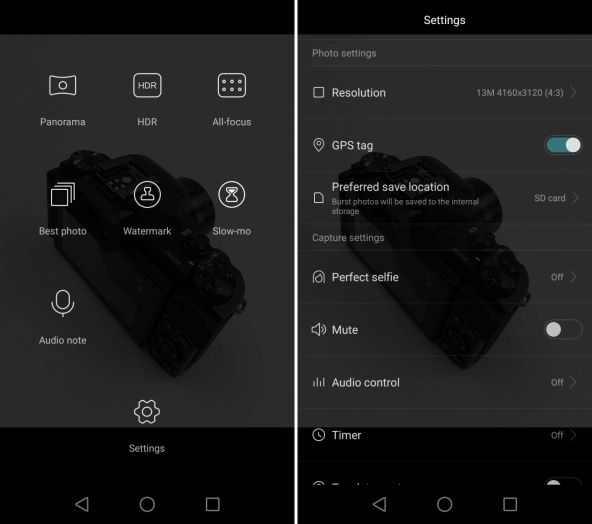 Back to the main camera, as we zoomed into the distance shots, the details were well preserved, so that’s a nice feat. Exposure and white balance were also top notch and there wasn’t any blurred pic in the gallery to criticize. The panorama was quite wide, at 12.608 pixels over 2112 pixels, which is OK and in the shade we did find the weak point of the camera, which is the washed out set of colors. 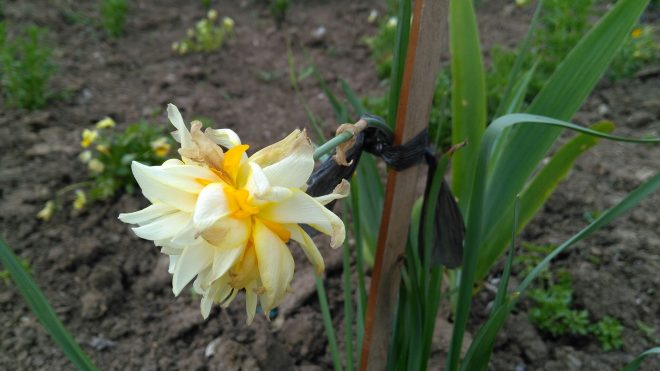 Low light capture was rather blurry and the only time it felt acceptable was when the flash was on. Colors are just OK during the night and there’s a slight fuzz about the image we didn’t dig. Street lights were also not so smartly rendered. Overall, I’d say the picture taking is OK for the price. On the video side, we filmed in MP4 format, in Full HD at 30 FPS and 20 Mbps bitrate.

Stabilization was poor, which was to be expected at this price and the acoustics felt echo-ey. The image was burnt sometimes and shaky, but the clarity was reasonable. There was a sudden exposure change or two and details were poor in the distance. During the low light filming, we had big halos for the lights, but also OK colors and a touch of grain and darkness. I found the video capture to be underwhelming overall.

Overall, this camera remains 10% to 15% better than what the Huawei Honor 4X offered and it films the same, but the core evolution is the one of the selfies, believe it or not. The web browser on the Huawei Honor 5X was rather slow and had poor benchmarks and as far as the keyboard goes, it was comfy and had the advantage of Swype. 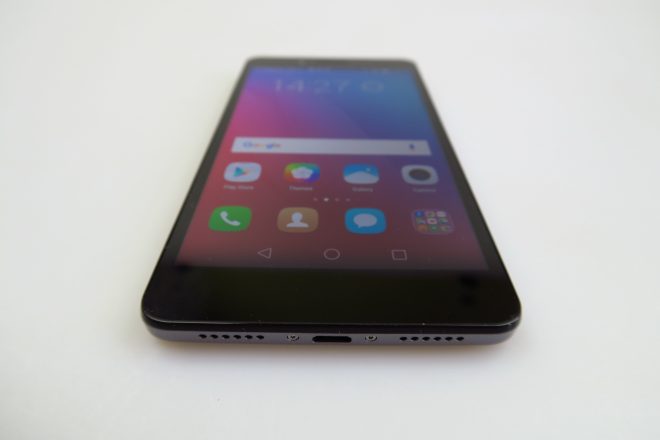 On the connectivity front, the handset brings the usual suspects: LTE, GPS, Glonass, Bluetooth 4.1, WiFi 802.11 b/g/n, microUSB 2.0. There’s a dual SIM setup here and we’ve got Speed Dial in the mix and a harassment filter setting. There’s also a noise cancellng microphone and the calls had an OK volume, clear sound and good signal.

We did a WiFi speed test and achieved 22 Mbps in download and 21 Mbps in upload. Now let’s see how the battery of the Huawei Honor 5X handled the heat. So, this is a 3000 mAh unit (Li-Ion), with SmartPower 3.0 technology, able to reduce use by 30%. It also supports 2A chargers and on paper it’s supposed to provide one day and a half of moderate use. 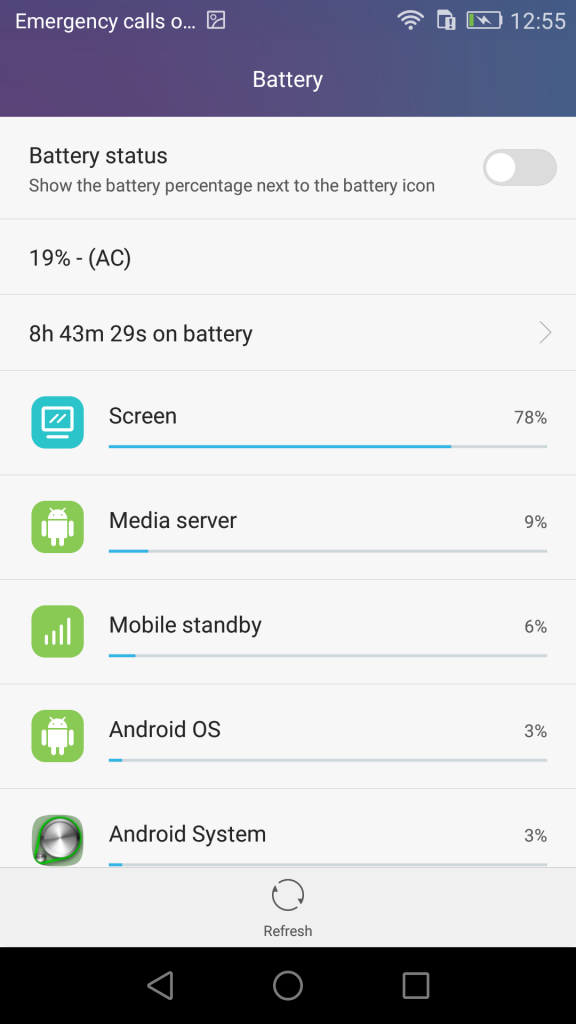 We tested the HD video playback time in a loop and achieved 8 hours and 43 minutes, which is quite good for a cheap midranger and it beats the Sony Xperia Z5 and HTC One A9. In PCMark we registered 6 hours and 52 minutes, meaning we beat the Nexus 6P and Huawei Mate S, plus the Lenovo Phab Plus, so we’re doing perfectly. Charging is a bit on the long side, requiring 3 hours and 11 minutes, simply too long.

Settings for the battery include an Optimize option and a Power Plan feature, with functions like Ultra, Smart and Normal. You can also turn the WiFi off in Sleep mode and adjust CPU and network use via the Power Plan features. Let’s talk about the OS, UI and apps for ab it now. The handset runs Android 5.1.1 with EMUI 3.1 on top and there’s no app drawer here. 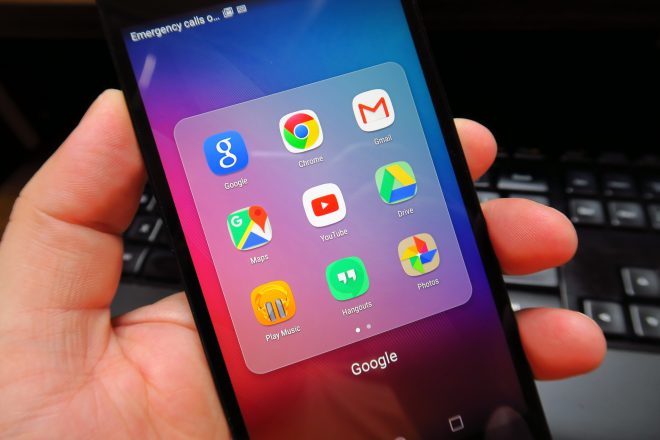 We get a flat UI with abstract icons and if you pinch the screen, you can see widgets that are minimal and nice looking. Transitions and layout can be customized from the same area. Multitasking takes the form of thumbnails, with 4 shown per screen and which can be shut down with a swipe up. The dropdown portion includes a timeline of notifications and a big set of icons for the Quick Settings.

The lockscreen includes shortcuts for the play/pause features, Share and Settings. Speaking of which, the device’s Settings are straight forward, letting you opt for a simpler UI, Do Not Disturb feature and access the fingerprint scanner. Said mechanism involves a 6 step setup and lets you use it for extra commands, like Go Back, Go Home, Take a Picture, Answer a All and Stop Alarm. 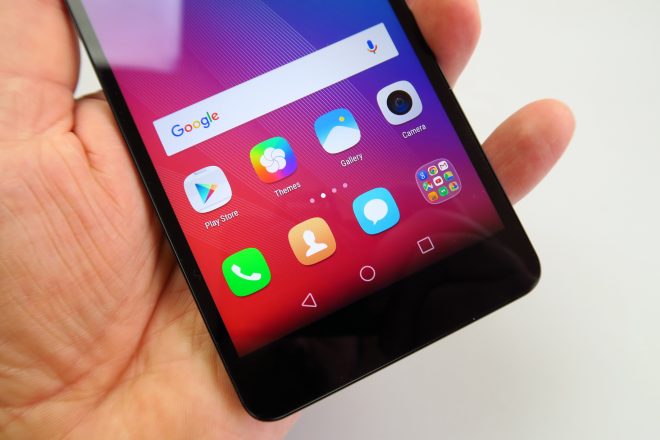 It can also show recent apps. The authentication is fast and accurate, like the unlock using the print. In the same Settings area we had the Motion Control, with options to draw symbols on the screen and double tap, plus tweak the nav bar and one hand UI. The preinstalled apps list includes 57 names, so this is clearly bloatware territory.

The most useful of them all is Phone Manager and we also get 15 Google apps, 5 social networking apps and 7 games.

Now let’s go to the Pros and Cons.

In the end we get a midranger disguised as a premium phone, that does a series of things in excellent fashion: selfies, display quality and battery life. It’s meant as a smartphone for the young and teens, but too bad for the acoustics and video capture, that would made it fit for media consumption and concert taping. At least the price is a mere $200.