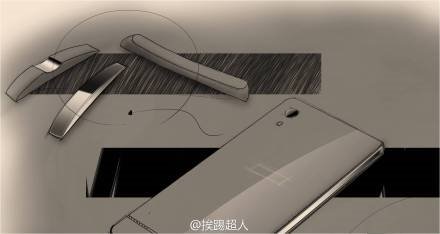 The Huawei Honor 6 has been leaked and rumored before, but today we stumble upon one of its sketches. The new smartphone looks like a future iPhone and it’s pictured below. I’ll have to remind you that the handset has a launch event scheduled for June 24th.

We’re only seeing a draft of the final version here and the device goes the minimalistic Apple way, with a flat back, a camera that’s not centered and slightly rounded corners. The back panel is straight ad as far as the specs are concerned, we’ve heard this unit packs a 5 inch Full HD display, 3 GB of RAM, a 13 megapixel back camera with Sony IMX214 processor and a front 5 megapixel cam.

There’s also an octa core Kirin 920 processor made by Huawei inside, clocked at 1.3 GHz and the OS is Android 4.4. Huawei Honor 6 uses a 3000 mAh battery and should be priced at $481 if the recent rumors are spot on. Its Kirin CPU has been benchmarked and found to achieve higher results than the Snapdragon 801, by the way.