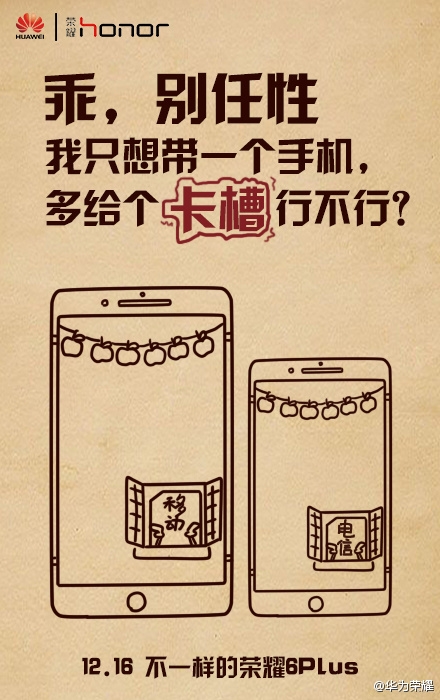 As you probably know already, we’re less than one week away from the debut of the first 3D cameraphone in a long time, the Huawei Honor 6 Plus. This model is expected to come with a dual back camera with 8 MP resolution and today we get a teaser of its debut.

The device is said to cost around $323 and its teaser seems to include two handsets and some apples hanging out to dry. This may reference the fact that the new model is expected to be better than the iPhone in some way. If you look at the device’s name, it’s quite obvious what device it competes with: iPhone 6 Plus. The newcomer will have a Kirin 92x series processor, most likely the Kirin 925, that already leaked in AnTuTu with this device.

This phone will integrate a 5.5 inch Full HD display, as well as 3 GB of RAM and a special coprocessor, much like the one on iPhones. There are also rumors about the inclusion of a fingerprint scanner, but there’s no guarantee. 16th December will bring us more info and most likely  a price we’ll like.