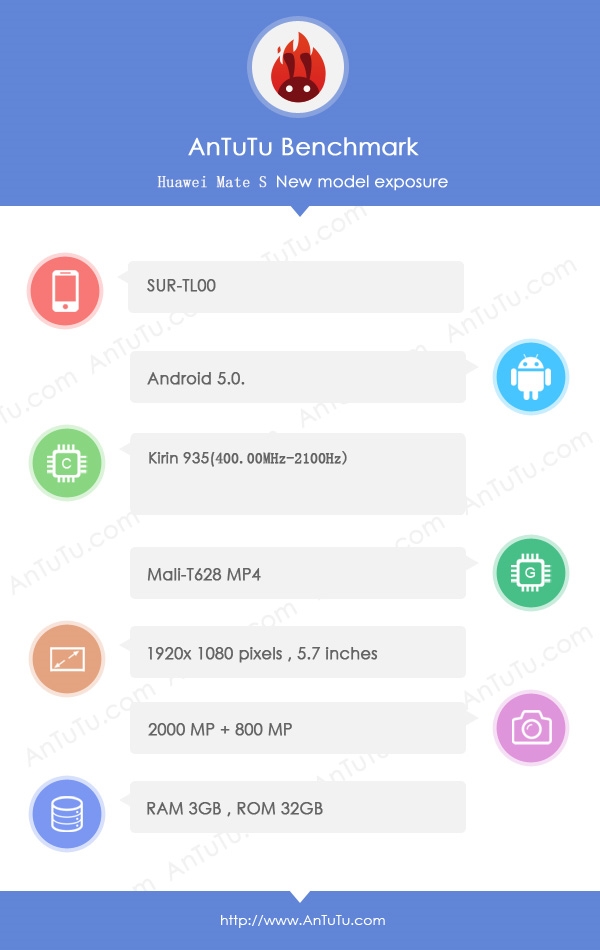 A few days ago we learned that the Huawei Mate 7S was going to debut at IFA 2015 in Berlin on September 2nd and also saw the handset getting the TENAA certification. Now, it appears the very same phone has passed through the AnTuTu benchmark, with a not very impressive score.

At least we get a second look at the specs of the handset, listed as “Huawei Mate S” here, or SUR-TL00, as the codename goes. Last we heard, this was supposed to be a 5.7 inch Full HD phablet, with a HiSilicon Kirin 935 processor, 3 GB of RAM and 32 GB of storage, plus a 13 MP back camera. Almost all specs are confirmed by AnTuTu, except for the camera, listed as a 20 MP unit and the front shooter as an 8 MP cam.

The handset runs Android 5.0 and scores just 46.776, probably having its score lowered by the relatively old Mali T628 MP4 GPU and its 3D graphics score of 11946 points. We’re expecting a metal chassis here, a narrow screen bezel and maybe even one more version with 4 GB RAM and a newer HiSilicon chipset.