Huawei P8 and the Huawei P8 Lite model have leaked again, this time together and show in renders that seem to reveal the same UI as in this leak. We know that on April 15th Huawei will announce the P8 flagship, and probably we’ll get to see the P8 Lite model at the same time.

This time the leak came from an Aussie website, that in the meantime deleted its post, making it look even more authentic. These leaks make the devices feel a bit like the iPhone 6 and finally reveal we get a singular back camera and a slim design with a metal edge. The Huawei P8 and P8 Lite are shown with the same minimal and golden UI that we saw them with hours ago.

The P8 is supposed to have a 5.2 inch Full HD screen and the P8 Lite a 5 inch 720p one. Both models will have microSD and SIM card slots on the right side. The P8 will feature a quad core HiSilicon Kirin 930 processor, as well as 3 GB of RAM, while the smaller unit will rely on a Kirin 620 processor, clocked at 1.2 GHz, accompanied by 2 GB of RAM. P8 Lite will offer 16 GB of storage, while the P8 will come with 32 GB. 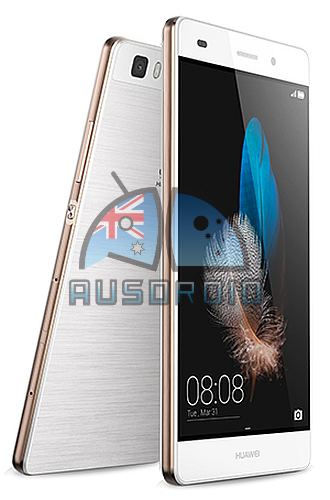 Their camera setup will be similar, at least at the back, where we’ll find 13 MP shooter, but the Lite model will bring a 5 MP selfie camera, unlike the 8 MP front shooter of the bigger unit.