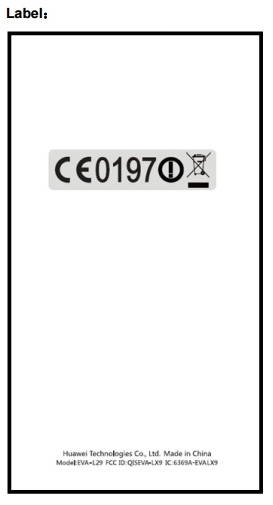 Huawei P9 was leaked a lot in the past few weeks, device that will be officially announced next week during a special press event that will take place in London on April 6th. Today, after a lot of leaks and teasers, we get to know that the upcoming phone just received its certification from FCC, meaning that the US market will get this smartphone too.

As always, such a certification reveals some of the phone’s connectivity features, and Huawei P9 is no exception here. This phone will offer Wi-Fi 802.11 a/b/g/n/ac, Bluetooth, NFC, and also 4G LTE-Advanced that promises a 300 Mbps download speed using the cellular network.

We are informed that this Huawei P9 variant called EVA-L29 brings a 2900 mAh battery on board, and also dual-SIM support for two nano-SIM cards. Compared to the 2680 mAh battery found on the Huawei P8, this increase in capacity is welcome here. We expect to see an USB Type-C port on this phone, and probably a quick charging technology.

Huawei P9 could have two other variants as well, talking here about the P9 Lite and the P9 Max – a huge phablet that will bring a 6.8 inch display.