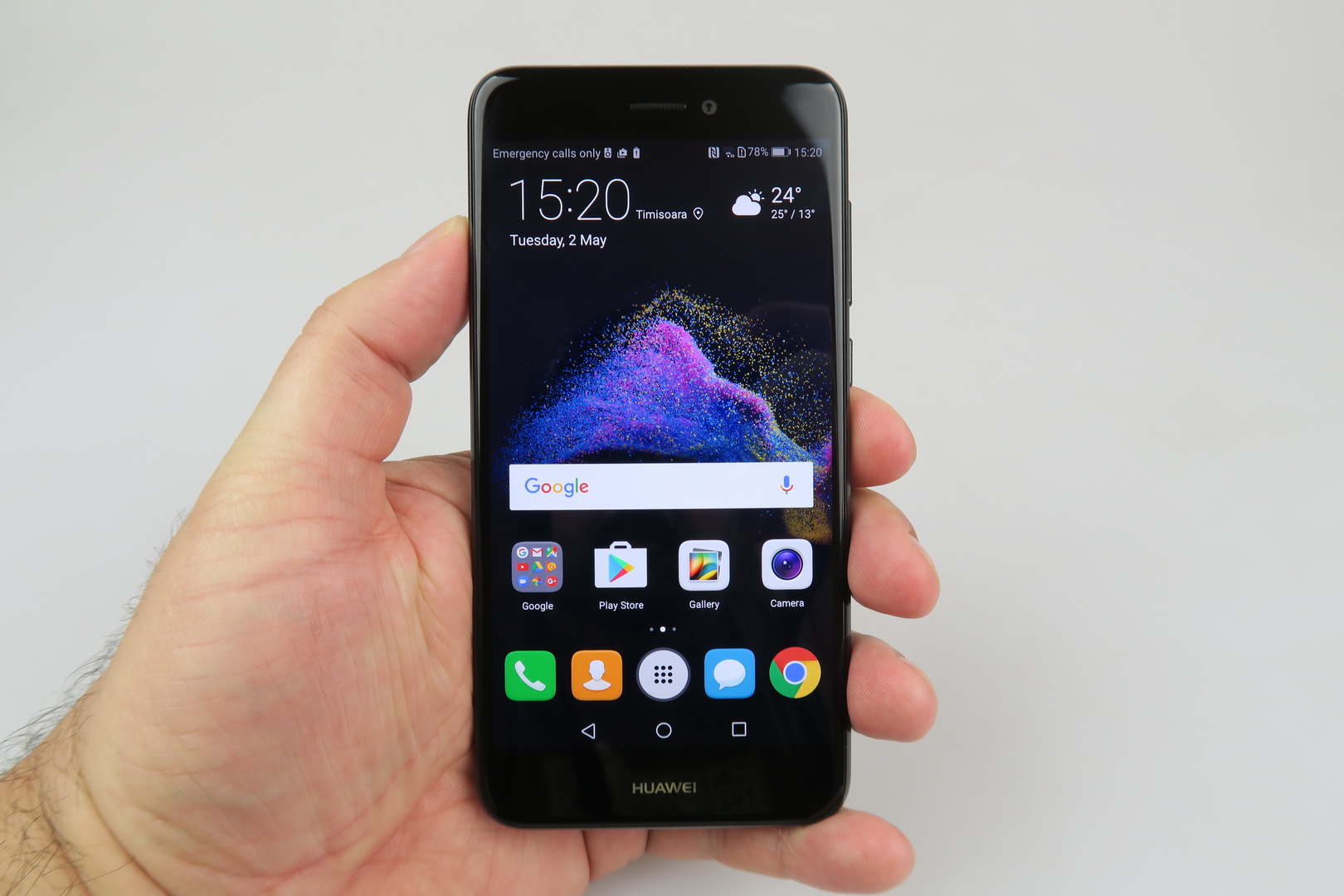 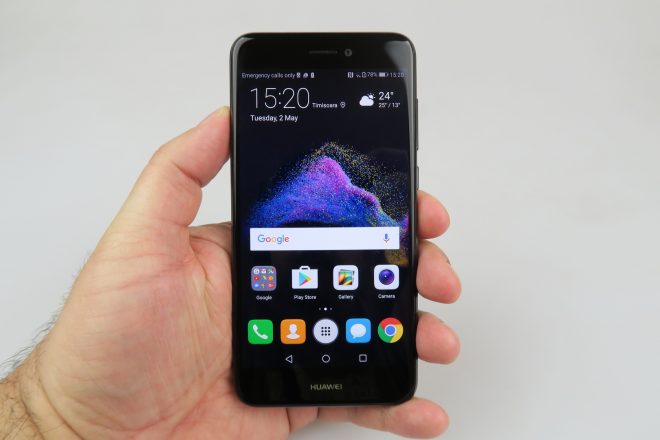 By the way, the handset is also known as the Huawei P8 Lite (2017) or the Honor 8 Lite. If you ask me, the last name is the one that fits the most, since the design feels more like an Honor 8 than a typical P Lite. Anyway, this device came in January this year and it’s available in black, white, gold or blue. It uses a glass and metal design, with a 2.5D glass panel at the front and a similar one at the back.

Squeezed between them is a metal frame, a sturdy one for that matter. This is clearly a more rounded phone than the P10 Lite and also compared to the P9 Lite. The move to glass means that it also draws light, grease and fingerprints, so you should use a case or carry a cleaning rag around. This is a smartphone that’s a bit too wide for easy one hand use, but it comes with comfy buttons and it’s quite pleasing to the eye. 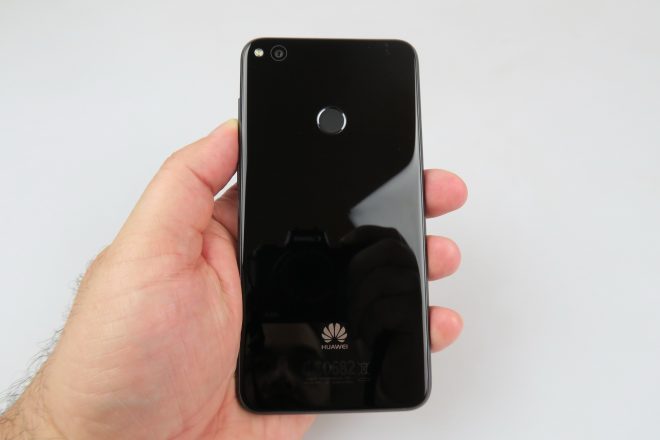 If you want size, know that it measures 7.6 mm in thickness, compared to the P9 Lite’s 7.5 mm and to the P10 Lite’s 7.2 mm. It also weighs 147 grams, identical to the P9 Lite before it. It’s got an unibody approach, narrow bezels and a pretty premium feel for a sub $300 phone. I’ll highlight again that it’s still pretty wide for a 5.2 incher.

As far as the display is concerned, we’ve got a 5.2 inch Full HD panel here, of the IPS LCD variety and this approach was also found on the P9 Lite and the P10 Lite, panel-wise at least. We used a video player to test the screen and we got to use features like Pop Up Play, Speed and Enhance Audio. The viewing experience is bright, colors are vivid and view angles are wide, while the contrast is rather good, too. 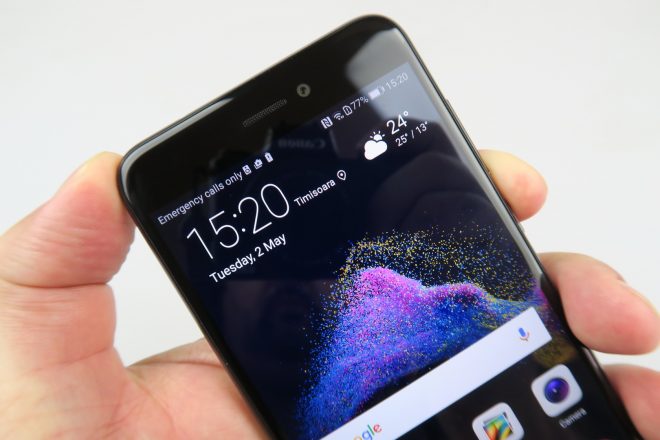 I felt that the screen was a bit too yellow for my own personal preference and if you put it next to a P10 Lite, you’ll see that that phone has a better white. Pixels are of the RGB Stripes variety here and the luxmeter showed us a value of 535 LUX units, which is great and clearly better than the P10 Lite’s 539 LUX. It also beats the iPhone 7 and it’s very close to the P10’s 539 LUX.

It’s still below the iPhone 6 and ASUS ZenFone 3. We also messed about with the screen settings, tweaking font size, eye comfort (blue light filter slider), brightness and color temperature (hue circle). You can also increase readability in the sun with a special option. A solid screen overall and now we move to other features. This handset uses an octa core Kirin 655 processor, clocked up to 2.1 GHz and with a Mali T830 MP2 GPU in the mix. 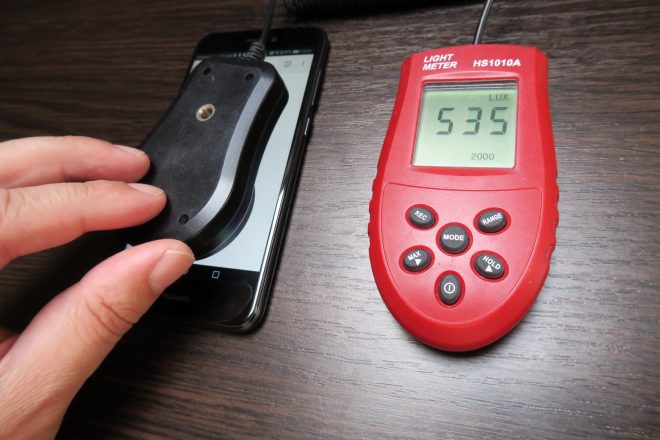 It comes with 3 or 4 GB of RAM (4 in India), 16 or 32 GB of storage, as well as a 64 GB version. There’s a microSD card slot here and we didn’t encounter any lag or delays as we used the phone. Games such as Riptide GP Renegade looked just fine, too. We also did a bunch of benchmarks, like Quadrant, where we surpassed the Vernee Thor handset, but scored below the Nubia N1. 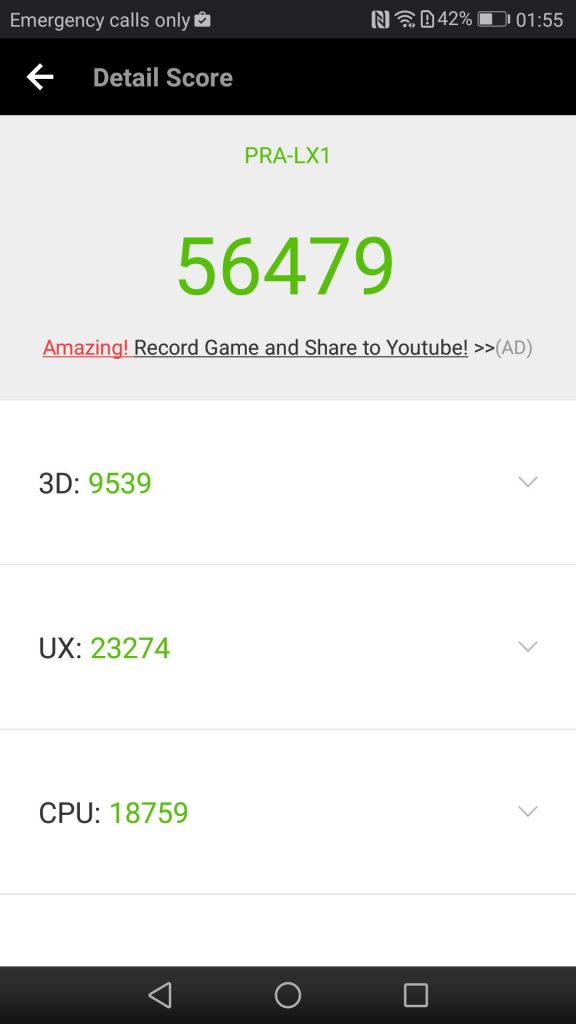 We also surpassed the P9 Lite in AnTuTu 6 by 4k points, as well as the Moto M. In the same test we came under the HTC One A9 and the Motorola Moto Z Play. In 3DMark Ice Storm Unlimited we surpassed the Huawei Mate S and scored below the Huawei Honor 6. These are all OK results for a midrange phone and they’re superior to what a Huawei Nova or Huawei Nova Plus provides, or at least they were in GeekBench 4, so that’s not bad. 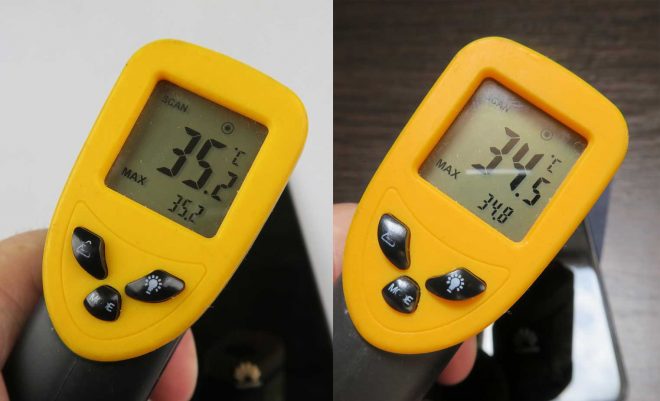 The GPU is no heavy hitter, though. We did a temperature test, too, reaching 34.8 degrees Celsius in GFXBench and 35.2 degrees in Riptide GP Renegade, so there’s no overheat here. Off to the battery, we get a 3000 mAh unit here, the same capacity as the P10 Lite and the P9 Lite. On paper we are promised 93 hours of functioning tops, which sounds rather impressive.

We did an HD video playback test and achieved 14 hours and 31 minutes, which is great. It’s placed on the 13th spot from all the handsets we’ve tested. It’s better than the Huawei Mate 9 and Galaxy S8, but scored below the Galaxy A5 (2017). In PCMark we reached 8 hours and 41 minutes, which is also good. It’s better than the Galaxy A7 (2016) and Nubia N1, but scores below the Huawei Nova Plus and Nova. 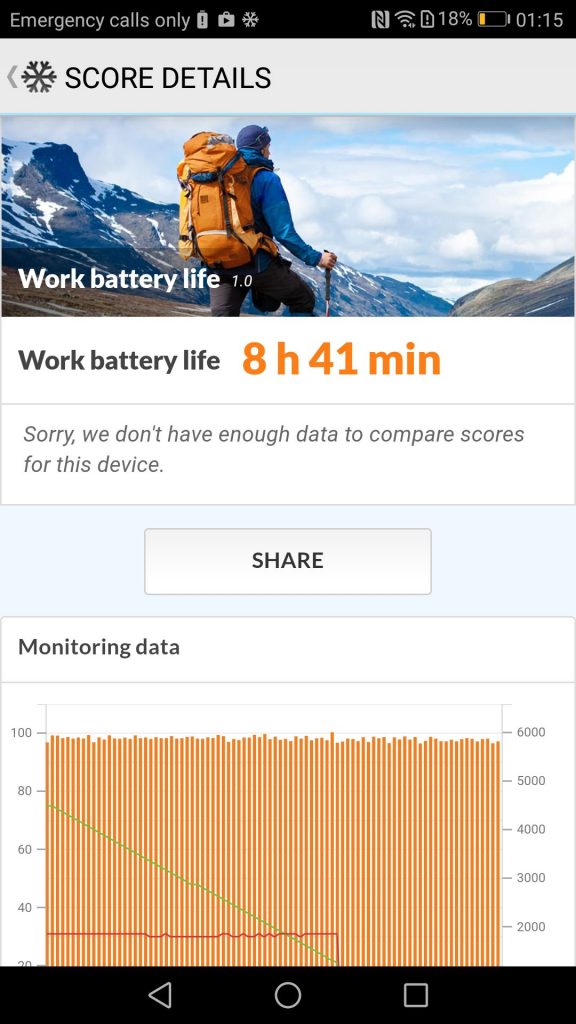 Charging is done in 2 hours and 18 minutes, which is better than the Huawei P10 Lite by a few minutes. However, the first steps of charging are fast, so after 5 minutes we reached 8% and after 15 minutes 20%. Half an hour means 38% and one hour 70%. There are also special battery settings here, like Low Resolution Power Saving, Optimize, WiFi on during sleep, Close Excessive Apps and Power Save Mode. There’s also Ultra Power Save Mode, that limits everything to the max.

On the audio front, I have to say we get no headphones here, so we focused on the speakers. There are two grilles at the bottom, but only the right one hides a speaker. There’s SWS technology and the listening experience was very loud and also slightly distorted at max volume. The bass is so-so, but the highs are well rendered. There’s no vibration of the back and voices are well rendered. 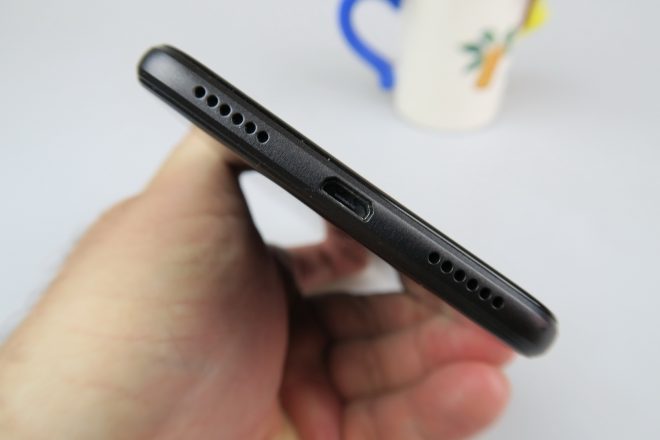 FM radio is in the mix too. We did a decibelmeter test and achieved 86.4 dBA when using our audio sample, plus 97.3 dBA in Riptide GP Renegade, which is very loud. The first test is superior to the iPhone 6 result, while the second beats the Galaxy S8. It was placed third all time when it came out, so all in all quite a loud machine. On the camera front, there’s a 12 MP F/2.2 back shooter with PDAF and LED flash, while upfront we find an 8 MP shooter with F/2.0 aperture and 77 degree lens. 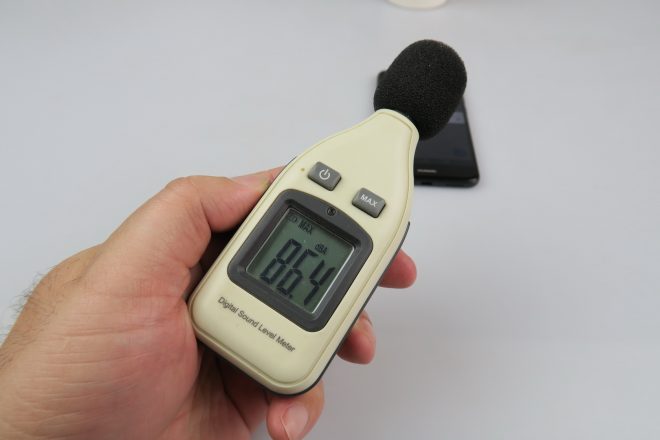 The camera app doesn’t start up quite fast, but the focus speed was OK . Picture taking could have been faster, though. The camera UI is typical, if you’ve seen a Huawei Nova, P9 Lite and P10 Lite lately. It’s got Beauty, Effects, Pro Mode, HDR, Time Lapse, Watermark and Audio Note. There’s also Light Painting and Slow Mo, as well as All Focus, so you can refocus after the shot.

Audio control, object tracking and metering are also here. Moving on to the gallery of shots taken during the day, we find oversaturated shots and the colors feel a bit too vivid, if you’re the kind who likes it closer to sRGB standard. Well, some people may prefer vivid shots. The bulk of the pictures were clear, crisp and provided good focus. 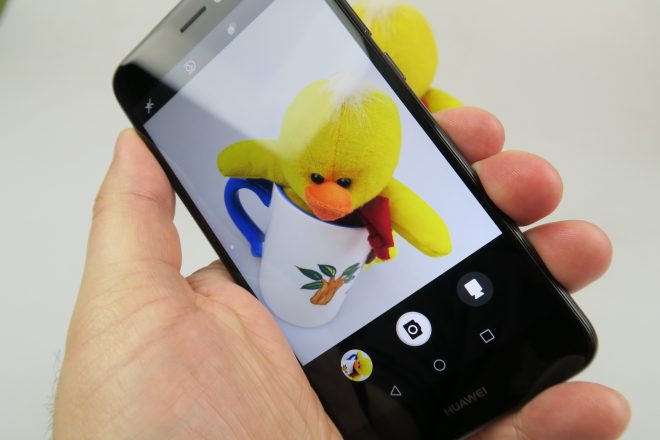 We also had good focus play, in the All Focus functionality. The zoom in provides some detail loss, after about 40% or so. Closeups are solid, the objects have a great texture and the HDR was good, removing the burn. Selfies show a more natural skin tone than the P10 Lite. I liked the fact that the pics taken with this phone are clearly less burnt than those taken with the P9 Lite last summer. 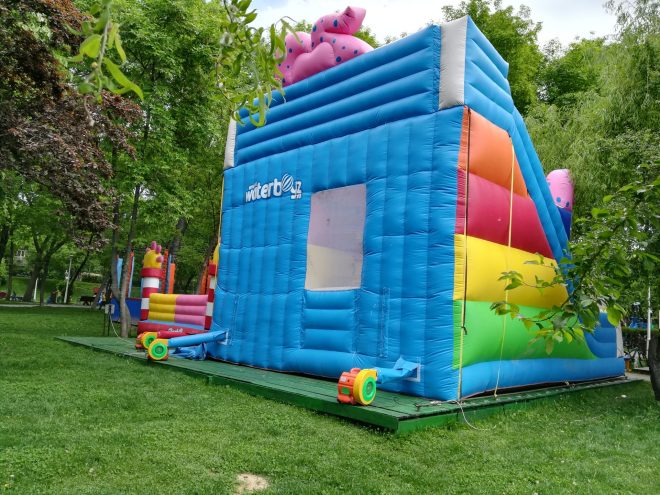 The details are OK-ish in landscape shots and I also liked the faucet closeup I pulled at some point. And once again HDR was really really good. Panorama was generous in resolution, at 12.160 x 2816 pixels, but also a bit curved. I’d say that the P9 Lite upgrade is clear and this device can fight the P10 Lite on equal terms. It can also combat the ASUS ZenFone 3.

In low light conditions we achieved better light halos than the P10 Lite, which rendered them in pretty elongated fashion. I liked the quality of the flash shots, the colors were nice and texture of objects and monuments was solid. The night time shots were less yellow than those taken with the P10 Lite. These captures are actually good for a midrange phone and clarity is quite good, maybe a bit above average. 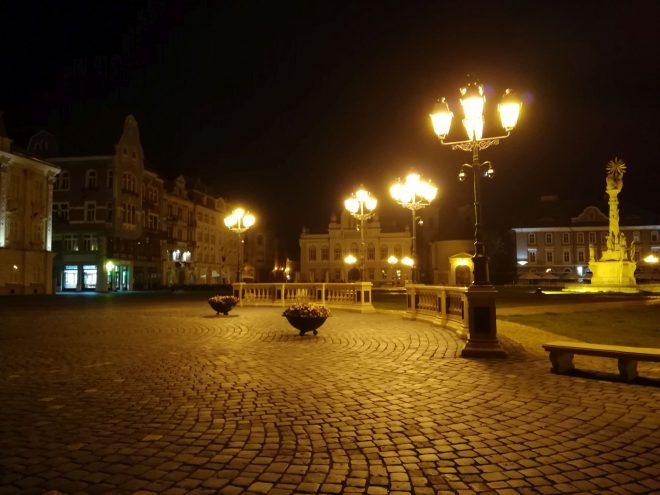 It can combat the Huawei Nova and ZenFone 3, so that’s no small feat. Now let’s discuss video capture. We shot MP4 videos, in Full HD, at 30 FPS and 17 Mbps. The wind put the device’s microphone in trouble, but we also have good news, like the fact that exposure change was smooth and the details were nice when zooming in. Electronic image stabilization was shaky, the colors were great, in the shade, but we also had some burnt areas in the sun.

Focus was solid, without problems. Even though burn happens, I feel that this handset films better than the Motorola Moto M and P9 Lite for sure. Low light videos were shaky, colors were OK, object tracking was fine and halos were reasonably sized. There’s no yellow or violet hue, some of the aspects that plagued even some high profile phones during low light video capture.

I’d say it’s a good video capture, at a price below $300. Moving on, the web browser of choice here is Chrome and it’s quite fast, even though its benchmarks are mid level. We had Swiftkey for input, with a numeric row included. On the connectivity front, there’s a dual SIM setup with nano SIM card slots, 4G LTE, GPS, Glonass and WiFi b/g/n. There’s Bluetooth 4.1, NFC, Link+ and microUSB 2.0 for some reason, not USB-C.

The Dialer includes a harassment filter, Speed Dial feature and Pocket Mode. The calls are loud and clear, noise cancelling is good and the microphone and signal were well within limits. We also did a SpeedTest, achieving 97 Mbps in 4G download and 15 Mbps in upload. The WiFi results were at 48 Mbps download and 25 Mbps in upload. Everything within limits, that’s for sure. 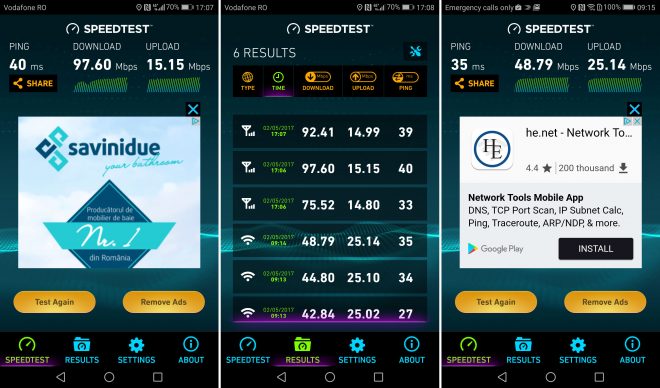 As far as software is concerned, this smartphone runs on Android Nougat with EMUI 5.0, while the P10 Lite had an EMUI 5.1 version. Multitasking is done via carousel and if you keep the homescreen pressed, you’ll trigger wallpaper, widgets (stock by the way), transitions and Settings (layout and such). The UI is quite sober and serious and I feel some inspiration from iOS 10 and Grace UX from Samsung. 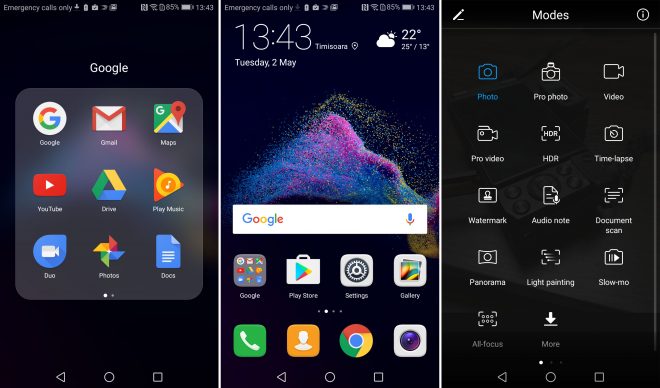 We’ve got black and blue toggles for Quick Settings and wide notifications. You can choose between app drawer or no app drawer, just so you know. The Settings include nav key options, floating dock, One Hand UI and strangely there are no knuckle gestures here. Voice control is also here, plus DND, Simple Mode and the fingerprint scanner options.

You can use it to take pictures, answer calls, browse pictures and it has a fast setup and fast unlock of the device. Huawei P9 Lite (2017) comes with 55 apps preinstalled, which is quite many, but many of them are also uninstallable. There’s Facebook, Instagram, Twitter, Google+, Health, Games, Phone Manager, TripAdvisor and Weather. 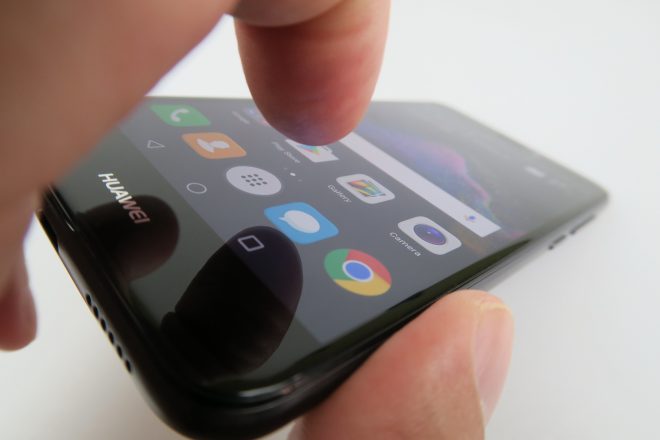 The conclusion here is that we’re dealing with the best Huawei midrange phone money can buy right now. It’s the best “bang for the buck” device, if you look at what you’re spending versus what you’re getting. In some areas the phone is even cheaper than $200, even $190 or less. It’s very solid for a midrange device and in some display and camera, plus battery areas it beats the P10 Lite, making the choice between them very hard.

It’s still an upgrade from the P9 Lite, even though a small one. The updated price of the device is here.