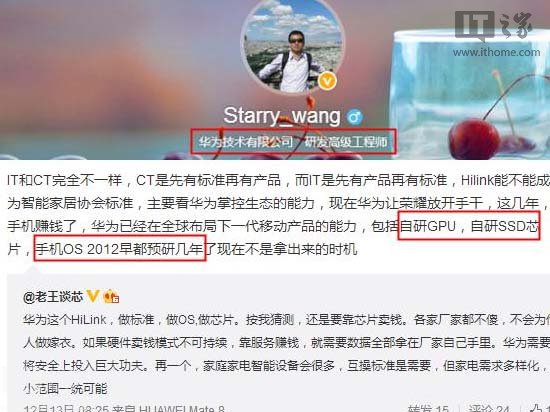 Huawei has had a very successful 2015, managing to sell over 100 million handsets and their success may be due in part to the fact that they’re doing their own thing and using their own CPUs and carefully picked camera sensors. They want to do even more in house sourcing next year, it seems.

So, aside from the hardcore Kirin 950 processor, that’s a powerhouse on the Huawei Mate 8, the Chinese firm wants to develop its own GPU and maybe its own OS. Kirin 950 brings a Mali T880 MP4 GPU, but that can’t even begin to compare with the high end GPUs from Qualcomm or Samsung. Recently, a Huawei engineer going as “Starry wang” on Weibo posted info that the company he’s working for now has the ability to move to a new generation of products, like a GPU.

The research on Huawei’s own OS began in 2012, but it’s now closer to being finalized. I guess it’s going to look a lot like EMUI, the custom layer of software that Huawei applies on top of Android. Huawei may also make its own SSD storage and try to rely on as few hardware partners as possible. I can’t wait to see their OS, especially since EMUI isn’t half bad.

By the way  the Weibo post from the Huawei employee got deleted fast.