Intel is known for trying to get now in the mobile race by launching chipsets for smartphones and tablets. Over the past years they’ve complained that Nokia was pulling them back through their software partnership, but now they’re free to do anything. Thus, they showcased the Medfield phone CPU early this year and now they reveal the plans for 2013. 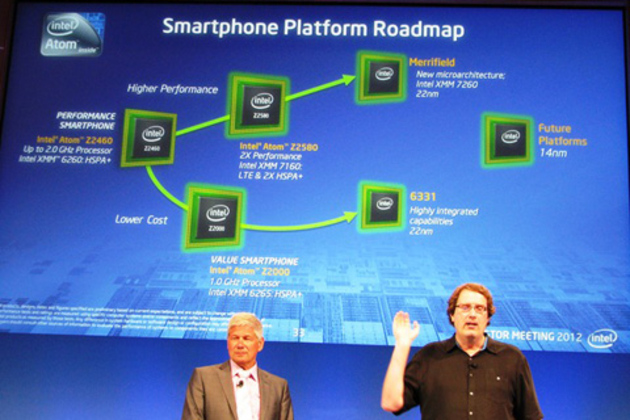 During a recent investor meeting in Santa Clara, California CEO Paul Otellini from Intel detailed next year’s new processors, Merrifield and 6331. Both are designed for phones and based on the new 22nm manufacturing process. The 6331 is a cheap single core chip, while the Merrifield is a dual core chipset meant for higher end smartphones. This solution also involves a new GPU that is supposed to provide an immersive experience, according to Mobile and Communications GM, Mike Bell.

Intel’s future roadmap also includes a 14 nm chip for 2014, but by then I’m sure Qualcomm and Nvidia will have figured out something even cooler. Considering that Qualcomm is playing with 28nm Snapdragons right now, they’re certainly more advanced then Intel, at least in the mobile area. Will Intel manage to power up some potent smartphones before the year is out?