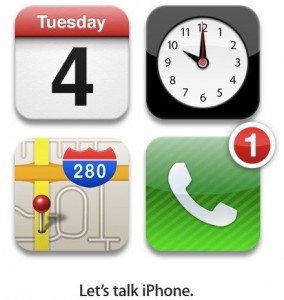 Apple has pretty much confirmed the debut of the next-gen iPhone on October 4th, sending out press invites over the past days. The invite says “Let’s talk iPhone” and there are rumors that we’ll not only see the iPhone 5/4S, but also an announcement from Tim Cook regarding iOS 5 and its new features.

These could include new voice control functions, according to Gene Munster, Piper Jaffray analyst, who recently issued an investment note. Last we heard, even Al Gore was promising a new iPhone or two, but the analyst begs to differ and says that Cook will talk more about software. The problem here is whether or not we’ll see a new iPhone or a cheaper one, since a 4S unit with lower price, lower storage and the same feats as the iPhone 4 might also be in the cards.

Apple could even enter the prepaid market with such an appealing product. Back to the iOS 5 voice control, this technology was very much aided by the acquisition of company Siri and partnership with Nuance. The new function allows the user to speak in English and have the Phone do the action that’s recited. iOS 5 will also bring Twitter integration and the event from next week is rumored to also include an official announcement for the iPad Facebook app.

I guess we’ll have to wait and see, but till then you can check out this video of the iOS 5 features: