While the Apple Tablet is more or less sure to be announced next week by now, we’ve still very little info concerning the next-gen iPhone. We don’t even know if it’ll be called the iPhone 4G, but the new concept below surely is dubbed this way.

We’ve found a list of the most important iPhone 4G-related rumours, compiled into a list available in the image below, with the percentage of them being authentic listed nearby. Thus, we learn that’s very likely that the iPhone 4G will sport a 5 megapixel camera with LED flash, an OLED display and even touch sensitive case.

Apparently, there’s also a front facing camera for video calls and a dual processor on board, plus more RAM and 64GB of NAND flash memory. The surest thing is the launch, somewhere around May and July, with a possibility of 99% of happening. Among the speculations there are also portable DVR functionality and built-in RFID. 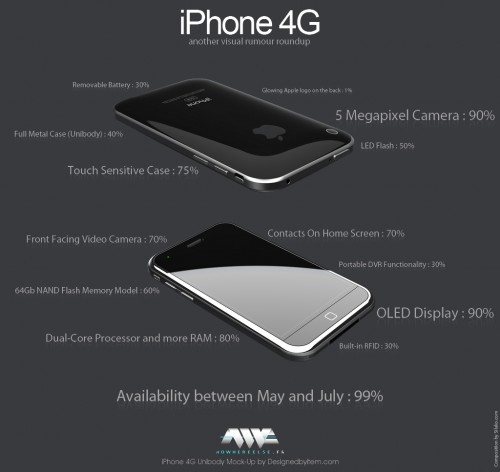