Apple’s iPhone 5 could come in the middle of August, not September as speculated by most blogs… A recent job posting indicates a possible debut of the next Apple phone, mentioning that the Cupertino giant is searching for full time iPhone sales staff to work for 5 days a week starting August 16th. 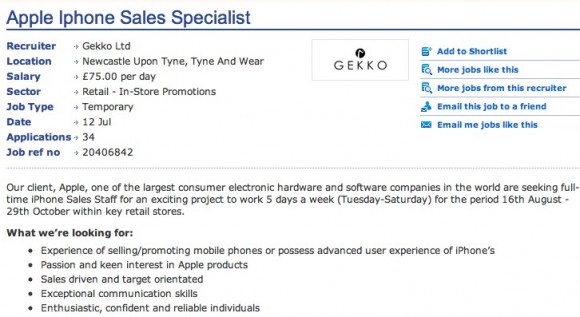 The limited time job lasts till October 29th and the new employee must “capture the hearts and minds of potential customers, whatever that means. The pay is pretty good: $120 a day and this job covers several areas in the UK. The future staff will get London training during a 4 day program ahead of the big day, involving “advanced user experience of iPhones”.

This can be a mere job posting with no meaning or a sign that Apple will be launching something big in less than a month. Will the new iPhone feature all the stuff that it’s supposed to? We’re talking about 8MP camera, dual core CPU and bigger display… I guess we’ll learn in August, one way or the other.