During the iPhone 5 showcasing on September 12th, Apple bragged not only about launching the thinnest smartphone on the market, but also the one with the best display. Both statements were wrong, since there quite a few thinner handsets and also some devices with better display. One of them is the Nokia Lumia 920, that while not thinner it’s certainly better in the display area. 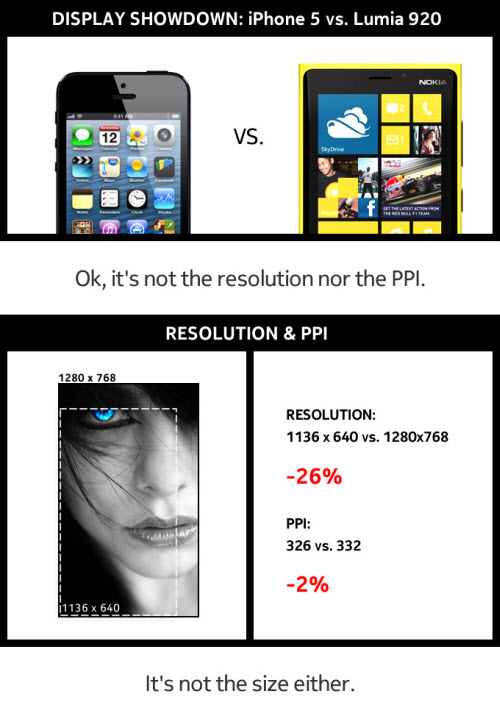 First of all, the iPhone 5 doesn’t even offer much of a resolution, in spite of being Retina Display level. It offers a 1136 x 640 pixel resolution, at 326 ppi, versus the Lumia 920 1280 x 768 pixels and 332 ppi. The Nokia phone also has a bigger diagonal, of 4.5 inches versus the 4 inches of the iPhone 5. Moving on, you should know that both screens uses LED IPS technology, but the Nokia screen is much brighter, at 600 nits, while the new iPhone only delivers 569 nits units.

Another advantage of the Nokia phone is the better visibility in full sunlight and you should know that the infographic we found actually compares the Nokia Lumia 900 screen behaviour in sunlight with the iPhone 5’s and even that model wins, so imagine what the new and improved Lumia 920 will do. Another advantage is the PureMotion HD+ tech, with a response time that’s 2.5x the one of normal IPS screens, with 60 Hz refresh rate. So, it appears that the iPhone 5 doesn’t actually sport the most revolutionary screen on the market… sorry Apple!