The big Apple event from September 12th just ended and the echoes of the keynote are still ringing in my head, as well as the Foo Fighters mini concert that took place. Turns out that the new iPhone will be called iPhone 5 after all and it took off today together with a bunch of new iPods, new earbuds, a new iTunes and more. All of the leaks, speculations and images that reached the web were right and that’s exactly what the new iPhone is like, a 4 inch  handset, longer than the iPhone 4S. 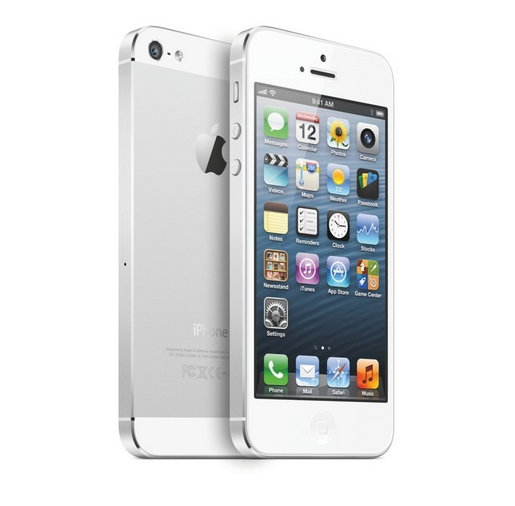 Tim Cook, Apple’s CEO was on stage to MC the event and started it all with the usual number reporting and all that. That’s how we found out that there are Apple Stores in 12 countries and they bring 83 million tourists only by themselves. There was also a showing of pics from a new Apple Store in Barcelona, adorned with limestone from a quarry close to its location. It was truly ellegant… Anyway, Cook continued by saying that 84 million iPads have been sold since the product first debuted. Also, he claims that Mountain Lion, the OS launched in July already reached 7 million paid upgrades.

The Retina Display MacBook Pro is also a hit, being seen as the best laptop ever in most fresh reviews. Continuing the figures, Apple now stands on the top spot as far as notebooks in USA are concerned over the past 3 months. They have a 27% market share overall and you should also know that the iPad grew from 62% in 2011 to a surprising 68% this year, in spite of seeing its rivals launch hundreds of new Android tablets and the threat of Windows 8 looming its head too. The dominatio of the iPad is reinforced by its use on the web, as it generates 91% of all web traffic of all the tablets in the world.

On the app side, the App Store provides access to 700 k pieces of software, of which 250 are for the iPad alone. Android can’t beat that, frankly… And after all this babbling, Phil Schiller entered the stage and made the iPhone 5 name official, also showing its beautiful looks. The handset is made of aluminum and glass and it relies on the Apple A6 processor, that offers a 2X performance boost from the iPhone 4S and also a 2X graphical boost. In order to showcase the power of the GPU an Electronic Arts representative was on stage demoing a new race game, that will probably be in the App Store soon. They praised the inclusion of the rear view mirror quite a bit…

You should know that the new iPhone comes with 4G LTE support and on the keynote’s screen you could see all the carriers in the world who offer such services. If you’re wondering about looks and design, the iPhone 5 is 7.6 mm in thickness, which Apple calls “the thinnest smartphone” for some reason, probably having forgotten about the 7.1 mm Motorola Droid RAZR. Anyway, the new iPhone has the same width as the iPhone 4S, but it’s longer and it weighs 112 grams, 20% lighter than its predecessor. 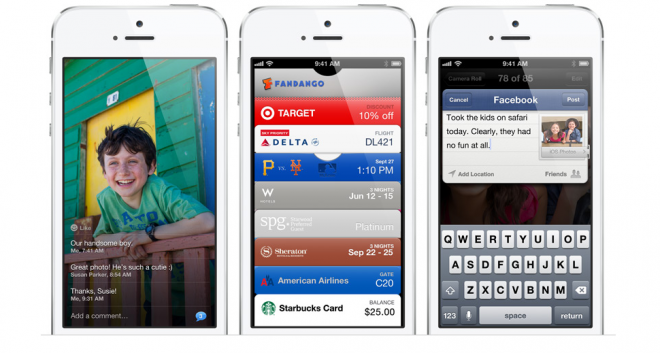 The screen upfront is a 4 inch Retina Display unit with a resolution of 1136 x 640 pixels and 16:9 aspect ratio, accounting to a 326 ppi pixel density. Another feature that was speculated on before the launch was the inclusion of the new port, a 16 pin one that was confirmed to be named Lightning. This one allows you to use it on both sides without having to mistake the jack’s side. Moving on to the back of the new Apple handset we find an 8 megapixel camera with 1080p video capture and video stabilization. At first sight it’s the same camera from the iPhone 4S, with minor quality upgrades and with a much smaller sensor.

Upfront we’ve got a FaceTime camera with 720p capture, in case you’re wondering. The new iPhone 5 main camera has backside illumination, F/2.4 aperture and a resolution of 3264 x 2448 pixels. It comes with a dynamic low light mode that will generate kickass pics even in lower light conditions. We’ll see about that, especially compared to the Nokia Lumia 920 PureView… For those of you frustrated buyers of speakers and docks for previous iPhones, worry not, as Apple and its partners will provide adapters for the new Lightning port, for a cost obviously. 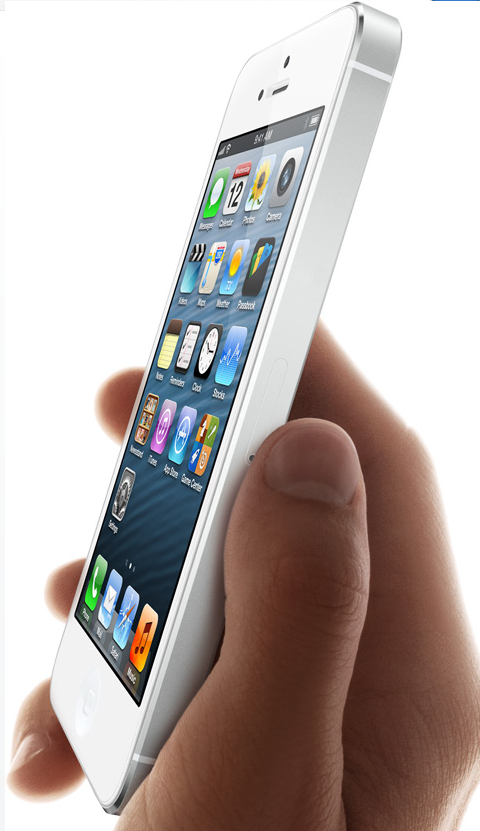 Another feature worth noting is the inclusion of 3 microphones on the new iPhone, one at the front, one at the side and one at the back, for extra noise cancelling. And finally, the battery! This one provides 8 hours of 3G talks, 10 hours of web browsing (WiFi) and 10 hours of video playback. For people looking for prices, they’re the same as the ones of the iPhone 4S when it debuted, meaning $199 for the 16 GB iPhone 5, $299 for the 32GB one and $399 for the 64 GB one. The handset ships to the first countries on September 21st, with orders starting on September 14th. The first wave includes USA, Germany, UK, Japan, France and a bunch more countries, with a second wave scheduled for 28th September and more to come in October.

The idea is to get the new iPhone to 100 countries and 240 carriers all over the world. And then the new products kept on rolling! Apple also showed the evolution of their Photo Stream, that now has a social feature, allowing you to share pics and comment on them easily. Photo Stream integrates iCloud on iOS 6.0 and supports syncing photos between devices. iTunes also got updated to a new version with a streamlined interface and simplicity as the main new features. It gets a cool new mini player, the ability to move from playback to playlist easily, iCloud integration and a revamped UI. 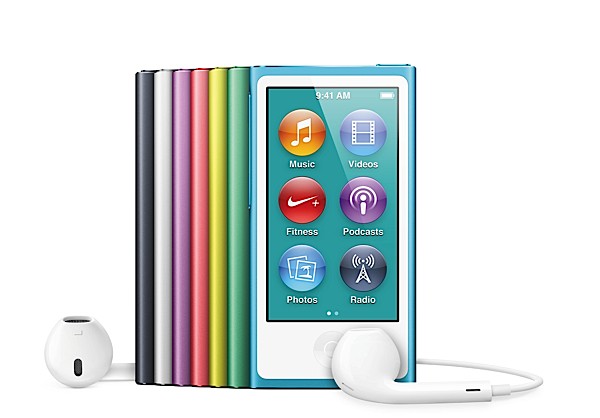 Continuing in the vein of music unveilings, Apple announced new generations of iPods, both Touch and Nano. The new iPod Nano is a bit longer and measures 5.4 mm in thickness, plus it packs a Home button and a 2.5 inch touchscreen. It also has a multifunctional big hardware button on the side with the role to play/pause/forward/back and volume at the same time. This device comes in 7 colour versions and runs some sort of lite iOS, with a simplistic interface. It also integrates an FM tuner and plays back widescreen videos.

Its battery is good enough for 30 hours of audio playback and you also get Bluetooth support and Lightning port. And then came the new iPod Touch, a 6.1 mm thick player with a 88 gram weight and aluminum back. One can see this model as a dumbed down iPhone 5, if you want. It’s got a 4 inch Retina Display and an Apple A5 processor, plus a 5 megapixel iSight camera with 1080p video capture. Its battery provides 40 hours of audio playback and 8 hours of video. A stand out point is the iPod Touch Loop, a button style thingie at the back of the player, that allows you to hang a lanyard. The device also has a front camera, capable of 720p FaceTime calls. 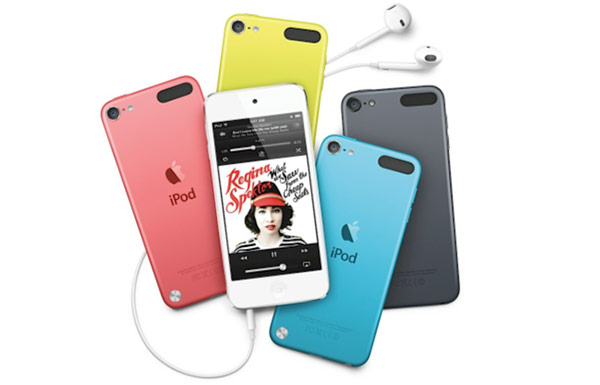 And another novelty were the EarPods earbuds, that have been 3 years in the works. They’re available today, with a separate order from the rest of the products, if you want. Of course they’re bundled with the new iPods and iPhone too. They’re created to fit better the ear of the user, from a geometrical point of view. The sound direction to the ear canal is also better now. Their form factor is also pretty unique and the amount of sounds ports is impressive.

And then there’s the price aspect for iPods: $149 for the new 16 GB Nano, $199 for the new iPod Touch, 16 GB as well, plus a ton of colour versions. At some point Tim Cook also demoed the new Siri features, like writing stuff on Facebook using it and the new Apple Maps with 3D features. Anyway, the overall impression was that something was missing and that “something” was the presence of Steve Jobs and the presence of a revolutionary product. The event was ended by the performance of Foo Fighters, who played 3 songs and right after the event the Apple stock value went down 4%, although I see that now it’s up 1%. All over the web I’m sensing mixed reactions from Apple fans and something seems amiss. People didn’t like this Apple keynote, since it was exactly what they were expecting… Did you like it?