The folks of Aatma Studio reached popularity with their concept videos, showing either a Transformer iPhone, or an iPhone with a projector or two iPads colliding into one. Now they’ve done it again, with a clip that may become viral, as it shows a domino of 10.000 iPhones. 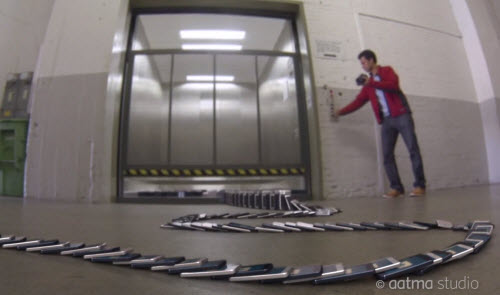 Although they didn’t mention which iPhone it is, it’s probably the iPhone 5S in a concept version, since the entire clip advertises its NFC potential. Once an iPhone hits the next handset in line it passes on content and when the domino is done, you see all of the phones playing a video in sync.

Of course, all the handsets are rendered, although at first glance they may seem real, so good job Aatma Studio. This could be a very nice commercial for NFC technology, maybe even better than the Samsung one with the two lovers behind glass walls sending each other stuff via S Beam. What do you think about this clip?