Gartner has just revealed a bunch of figures showing the sales of smartphones in 2009. From these we learn that Apple’s iPhone doubled its international smartphone market share to 14.4%, up 6.2% from 2008, while Nokia’s Symbian high end devices keep their first place in this segment. 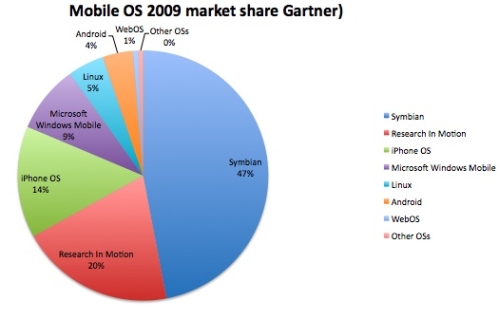 Nokia’s market share declined 5.5 points to 46.9%, while RIM and its Blackberries come second, with a 3.3 points increase in market share, reaching a 19.9% share. In the States, BlackBerry and Apple have a much larger market share than Symbian and as far as mobile traffic is concerned, Apple and Android dominate the segment, with 81% market share.

Gartner also informs us that the Android phone sales increased by 3.4 points, up to 3.9%, but still Android trails behind Windows Mobile and Linux. The first platform had its market share drop 3.1 points, while Linux saw a decrease by 2.9%. Palm’s WebOS isn’t taking the pressure too well, with a 0.7% share.

The same study estimates that 172 million smartphones were sold in 2009, up 24% from 2008. The iPhone stood for 2% of all mobile phone sales last year and if you want more details, you can check out the tables below. 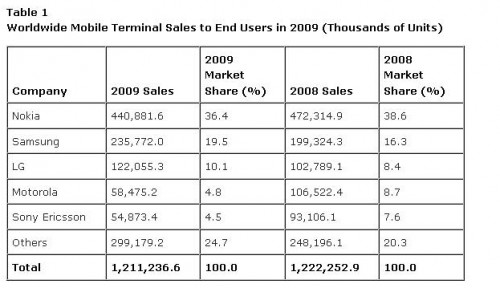 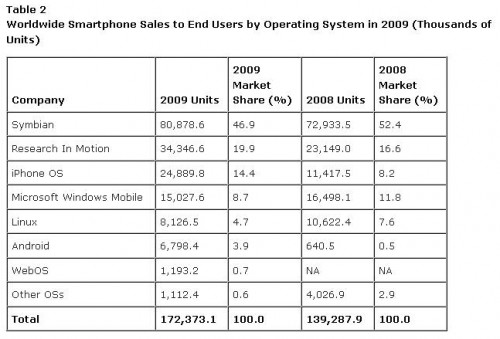