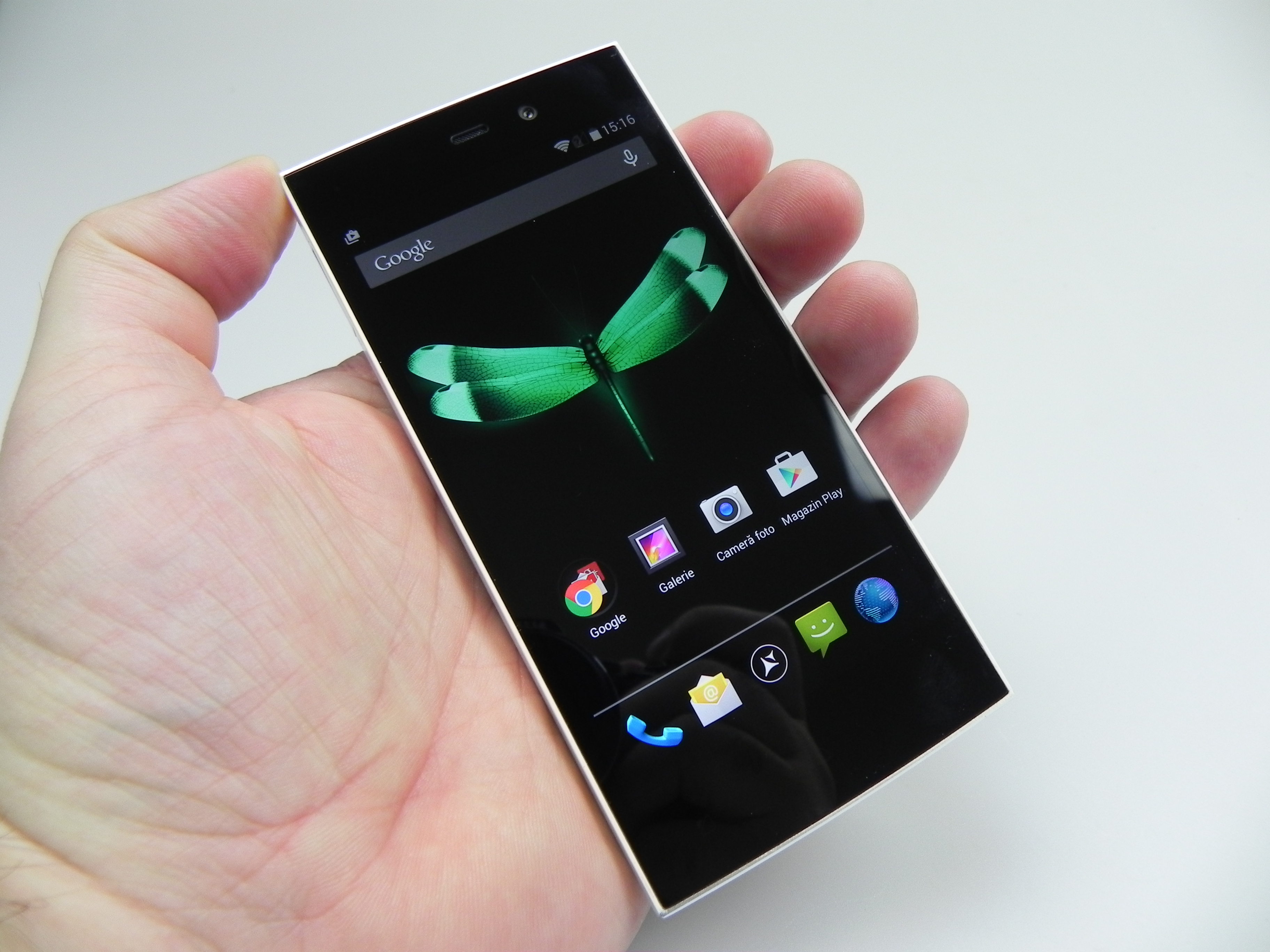 We usually review quite a lot of Allview handsets, some of them rebranded versions of the Gionee devices. Today we’re detailing the Allview X1 Xtreme Mini model, a rebranded version of the IUNI U2, a Chinese phone launched in November 2014, that stands out through a strong Ultrapixel camera. The product is priced at $290 in China and it comes with a metallic design. 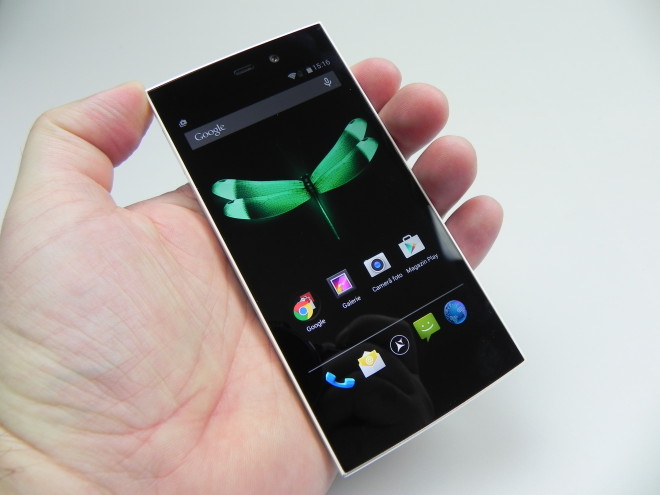 It measures 10.3 mm in thickness, weighs 139.2 grams and it’s pretty massive for a 4.7 inch phone. It adopts a unibody metal case, with a slightly rounded back and a look that reminds me of the HTC One. The device is available in green or gray and it’s not very comfy for gaming, being so bulky and all, plus very squared. IUNI U2 comes with a thick and bulky design approach, but it does offer good grip and it’s not very easy to use with one hand.

Romanian brand Allview also offered a custom version with a message engraved at the back of the device, depending on the user’s preference. At the front we find an earpiece, notification LED, front camera, 3 capacitive buttons and at the back there’s a big camera bulk, a microphone and LED flash. We’ve got speakers at the bottom, a microUSB port and another microphone. 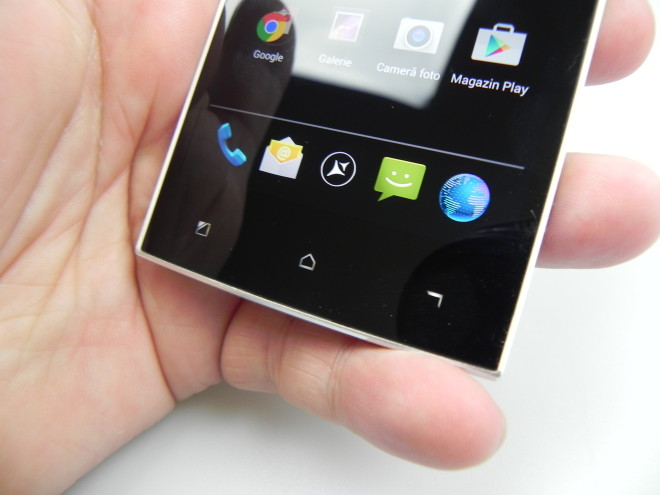 At the top there’s audio jack and On/Off button with good feedback. Finally, on the left there’s a microSIM tray, while on the right there are volume buttons with good feedback. This model doesn’t feel massive on its own, but it feels massive when you think of it as a Mini model. Also, for a 4.7 incher it’s quite big. At least the build is solid and materials are premium.

As far as hardware goes, there’s a 4.7 inch Full HD display on board, a LTPS IPS LCD unit, as well as a quad core Snapdragon 800 CPU, clocked at 2.15 GHz and 2 GB of LPDDR3 RAM. The only storage is 16 GB, since there’s no  microSD card slot available here. We also get an Adreno 330 450 MHz GPU, a 16 megapixel back camera and a front 4 megapixel cam with Ultrapixel technology. 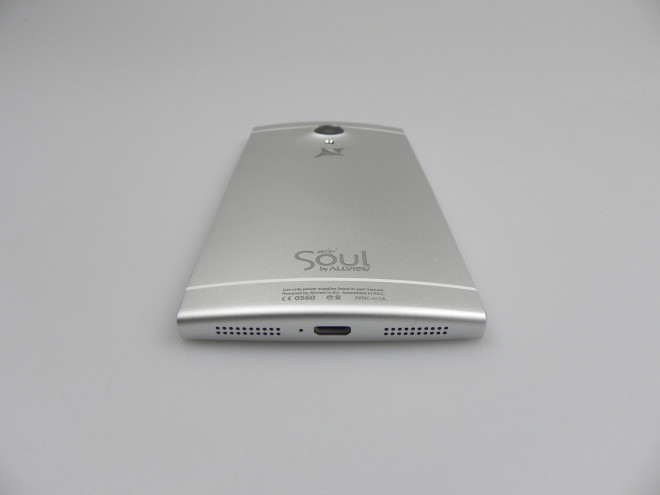 On the connectivity side we’ve got GPS, HSDPA with 42 Mbps download, Bluetooth 4.0, WiFi dual band, WiFi Direct, WiFi display and microUSB 2.0. Other specs include a Yamaha audio amplifier, accelerometer proximity sensor, compass and light sensor. The battery is a Li-Po 2200 mAh unit and the charger is a 5V/1000 mA model. On paper, the battery offers up to 11 hours of talk time and 220 hours of standby. It comes with SDI technology for an extra of up to 30% in increased functioning capacity

During our test, that involves HD video playback with WiFi on and brightness at 50% we achieved a time of 7 hours and 14 minutes of video playback, similar to the one of HTC One. It’s also one hour less than the bigger model, Allview X1 Xtreme. The average use is one day, or one day and a half and the standby time was actually quite good. During the night, this model only loses a few percentage points, which is OK. 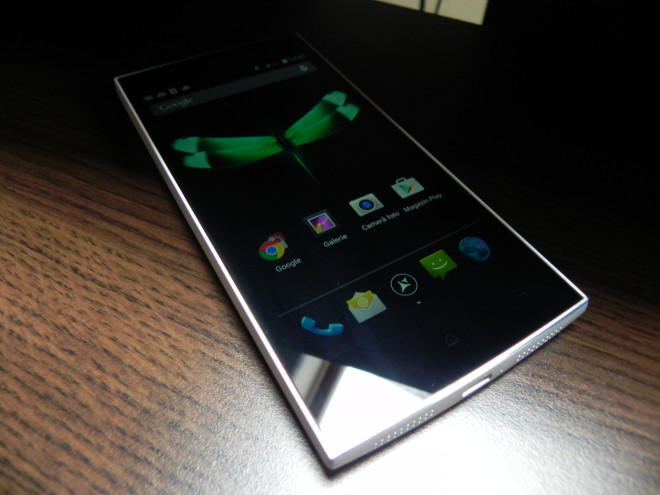 The charging takes 2 hours and 40 minutes, pretty much like the Allview X1 Xtreme. There’s no Power Saving in the Settings area and overall the battery is OK. Now, we move over to the acoustics, that provide us with a Yamaha amplifier and DTS sound, plus the Google Play Music app, used to play the tunes on the device. This handset actually has a single speaker, in spite of seeming to have two of them at the button.

The volume achieved by the speaker is medium, but the bass and clarity are OK. There’s a slight bit of distortion when the volume reaches the max level. Also, the volume could be a bit higher, if I’m being really honest here. The equalizer is the stock one and the headphones come with a long jack, premium look and they’re quite comfy. They’re also loud, clear and have an OK bass, as well as good isolation. We’ve got a discrete remote in the mix, no FM radio in case you’re wondering and the Settings area features DTS sound with options like Focus, Bass Boost, 3D Effect, Reverb and Clarity. 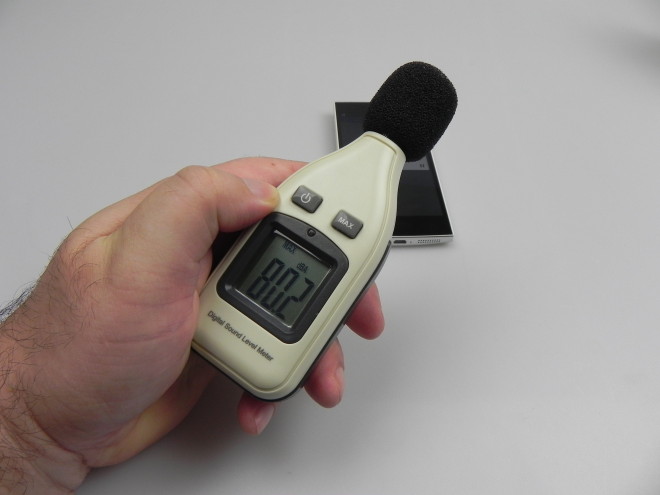 We used a decibelmeter to test this model and achieved 80.2/80.6 dBA at the back and front. Meanwhile, other more affordable Allview handsets like the P6 Energy achieve 85 dBA or 84 decibels like in the case of the Karbonn Titanium S6. Volume could be higher overall and there are no extra settings to play with. As far as the display is concerned, we’re dealing with a Sharp IPS LCD Full HD unit, with a 4.7 inch diagonal and LTPS OGS technology.

The screen offers a 469 ppi density and the LTPS thing provides improved response time. Gorilla Glass 3 protection is also here and you should know the handset doesn’t bring a video player, instead only relying on the Gallery app. The actual viewing experience is bright, oversaturated and features wide viewing angles. The screen is very clear and the high resolution and small diagonal make the text look excellent. 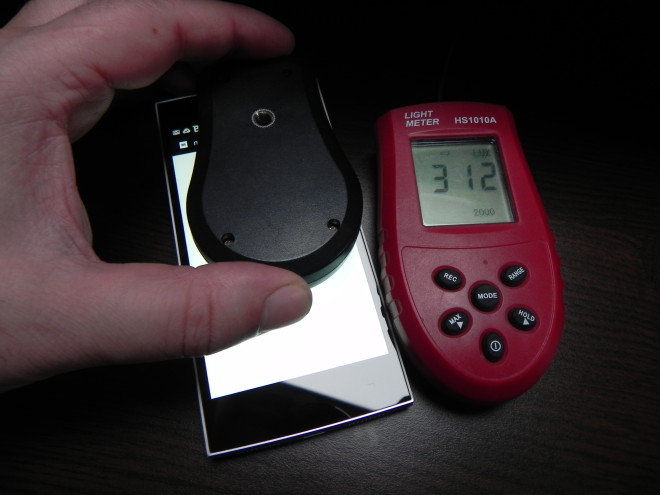 Still, the display is bad in sunlight and under the microscope we spotted the RGB Stripe pixels pattern. We achieved 312 LUX units on white, a bit below our expectations and below the bigger X1 Xtreme model, that had 337 LUX. There are lots of midrange models we tested that are able to pass 400 LUX, so that’s why we called this underwhelming. Still with the day by day use, we feel the actual brightness is a bit higher, maybe around 350 LUX or so.

Now, the camera is an entirely different affair, since there’s a ton of stuff to discuss here. First, we’re dealing with a 16 MP back camera, with an OV 16825 sensor, sapphire lens with anti reflection filter, UV and IR filter. The sensor measures 1/2.3 inches and it dates from back in 2012. It uses OmniBSI 2 technology and its pixels measure 1.34 microns. 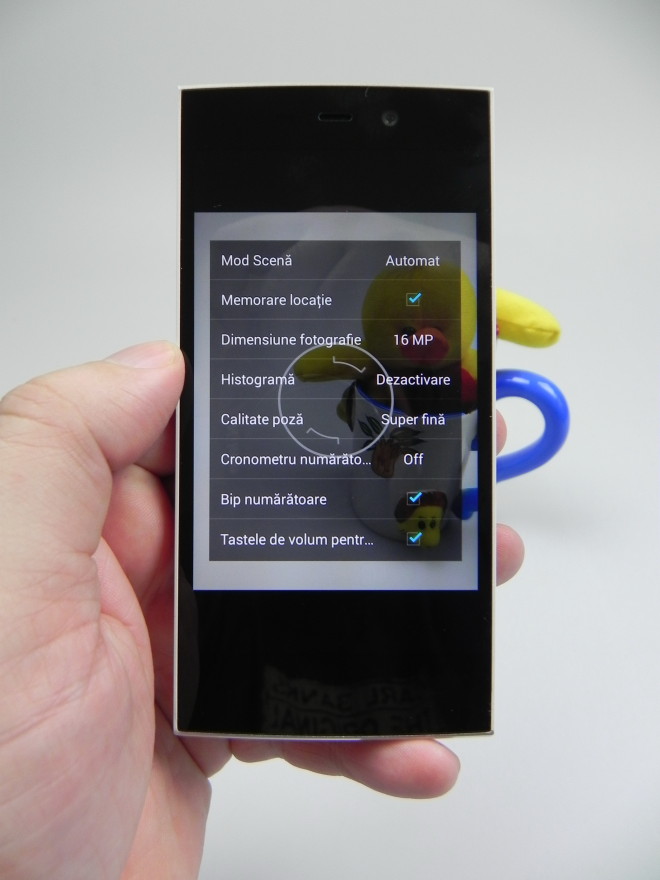 The front camera is the appealing part, a 4 MP unit with Ultrapixel technology and 2 micron pixel size. It’s an Omnivision OV 4688 sensor in the mix, from 2013, a model also used on HTC One handsets as the main camera. It measures 1/3 inches and uses lower power. The camera UI is similar to what we saw on the Jelly Bean stock camera app, but slightly tweaked. 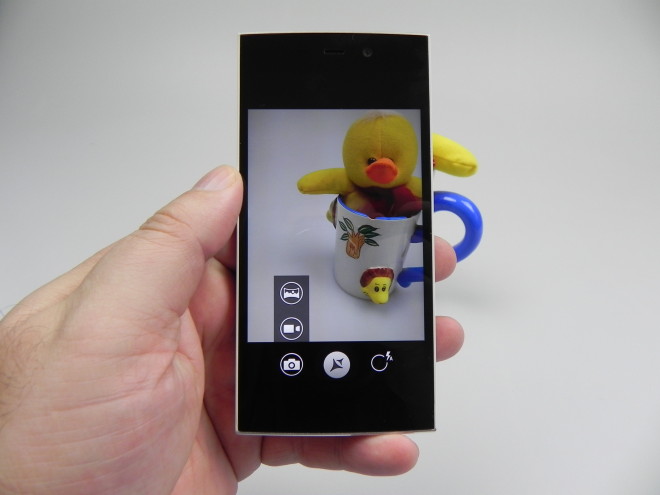 The very same modes are available for the front camera, by the way. The video options include Time Lapse, resolution (Full HD, 720p and lower), encoder (MP4, H263, H264), audio (AAC/AMRNB), duration, location anti banding, color effect, white balance and flash. The front camera does full HD filming, in case you didn’t know. The focus is fast, capture is slow and we’ve got 6x zoom available on both cameras.

Now, as far as the pictures themselves go, the level of detail is OK, colors are cold at first and HDR adds some strange red-ish hue. Still, HDR is also able to light up the shots and provide clearer details. The toys we photographed provide good details, we get good and realistic colors there and the bear face was actually a pretty good macro.

We also tried to use the front cam as a back cam for a bit, but the shots were blurry. When taking selfies, the pictures look excellent, with a huge focus on the face and a blurred background, by the way. Details are pretty good in selfies, still. The macro of that white dog looks fine and reds look good in the shots you can see detailed in this gallery. 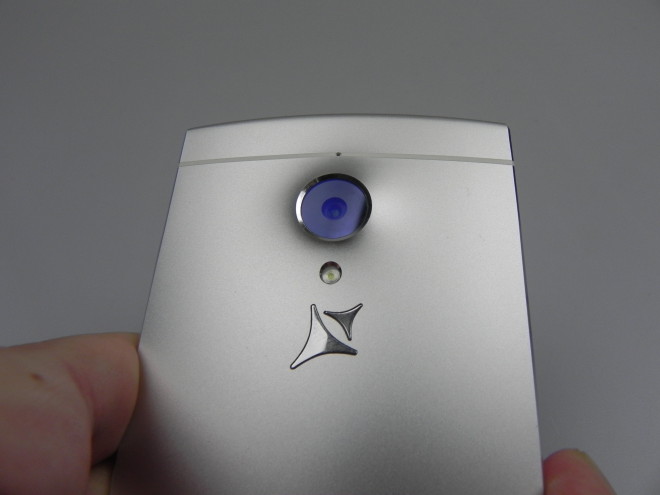 Overall, the exposure, white balance and quality of the pictures are top notch and no complaint can be had about the focus. Zooming in on that horse produces good details and the camera behaves well even in full sunlight. Panorama seems fine at first sight, but it’s actually a bit more blurry than expected. Overall, I’d say we’re getting a very good camera for the price, but from a 16 MP sensor we expected much more.

It’s about 40% less impressive than the camera of the Allview X1 Xtreme and feels like maybe a 10 or 12 MP unit, not a 16 MP one. The video we filmed was MP4 Full HD at 24 FPS, with a 20 Mbps bitrate. We registered poor image stabilization, some minor focus problems, but also good acoustics, since my headphones were heard throughout the videos. Colors were cold, there was a bit of motion blur going on at some point and colors also felt washed out.

With electronic image stabilization on, things felt a bit better, but not by much. If I were to make a quick comparison, I wouldn’t trade this camera for the one on the HTC One Mini for example, since I feel that’s a bit better. Still, the performance of the selfie camera can’t be denied. You can also do some video editing, using filters, frames, crop, rotate options, exposure and shadows settings and more. 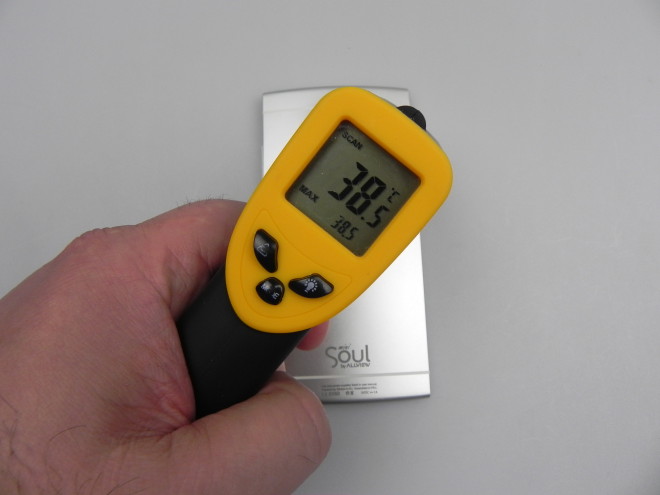 The device was also tested with a thermometer, achieving 38.5 degrees Celsius, after 15 minutes of playing Riptide GP2, so there’s no overheating. The browser was reasonably fast and the keyboard was the stock one. The phone calling part offered loud and clear calls, an OK volume, but there were problems with the WiFi and 3G signal and abnormally low download speeds, on both connections, sadly. The fault of the metal case? Maybe…

Allview X1 Xtreme Mini wins 4 out of the 10 battles and offers good benchmarks, plus it runs Riptide GP2 well, without lag. The UI of the phone is also free of lag and I must once again stress this is not a very comfy gaming device, on account of it being so bulky. The OS here is Android 4.4.2 KitKat with a pretty much stock UI and if you keep the menu button pressed, you’ll trigger the multitasking swipe-based area. 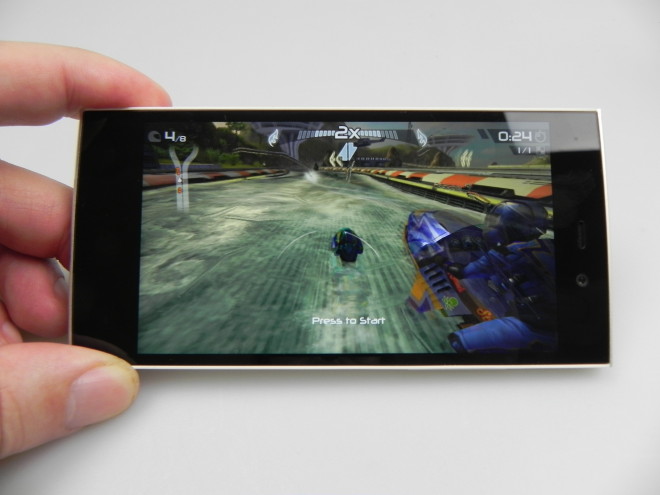 Now we’ve reached the end of the review and this is the verdict.

We give this model an 8 out of 10 for design, another 8 for hardware and a 9.2 out of 10 for OS and UI. The final grade is 8.4 out of 10 for the Allview X1 Xtreme Mini, the rebranded version of the IUNI U2. This model is all about performance on a small diagonal, very good selfies, but if you’re able to sacrifice metal for a plastic case, you may just spend less and get a better display and main camera, in the end…