We’ve been hearing about Lenovo’s Android OPhone forever now, but it seems that the device will finally see the light of day next month, according to PC World. The handset will debut in China, bearing the name of Lenovo O1 OPhone. 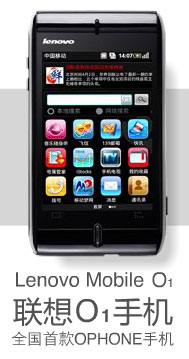 China Mobile will be carrying the handset, while the rivals from China Unicom are in talks with Apple regarding the acquisition of the Apple iPhone. These carriers use different 3G technologies and China Mobile relies on the TD-SCDMA standard, a less popular choice with less coverage.

We remind you that the new Lenovo handset will rely on China Mobile’s Open Mobile Platform, the proprietary version of Android, also known as the OPhone. What’s troubling is the REAL name of this handset…On the official site, in some places it’s called the OPhone O1, in others the O1 Ophone, or even Lenovo Mobile O1… make up your mind, will you?