Samsung Galaxy S III hasn’t even launched yet and already there’s a similar model from Pantech (Vega Racer 2) and a rival prepared by LG. Said rival is the LG D1L model, that’s spotted in the roadmap below. We’re dealing here with a smartphone that features a 4.7 inch HD display, LTE and 3G and will launch in May. 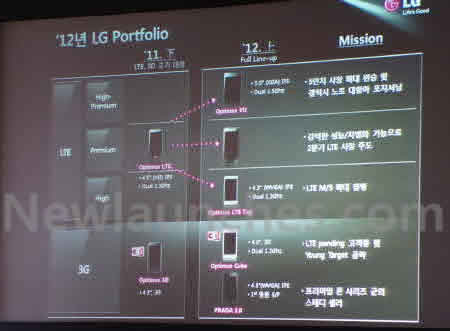 Inside there’s a Qualcomm MSM8960 chipset, a dual core 1.5 GHz unit that provides the same performance as a quad core ARM processor. This will actually be the first LG phone to run on Ice Cream Sandwich from the box. Right now LG is being quiet about the device, but they did confirm its existence, so at least we have that. Expect an official debut event in the following 3 weeks. I see this model as a direct rival to the HTC One X, since it has similar specs to it, or should I say to the One XL?

Also, it should rival the Galaxy S III and complete the already interesting L series. I guess that LG D1L is a mere codename, since it doesn’t seem commercial enough to put it on a product just yet. I wonder if this device will be part of the L series or Optimus series… what’s your guess?