It’s 2014 and @evleaks is pulling off his first leak this year, unless I’ve missed other tweets from him. He published a picture showing the AT&T and T-Mobile versions of the LG G Flex handset. This model is a big deal, because it’s the start of a new design trend that will shape the whole future of mobiles. 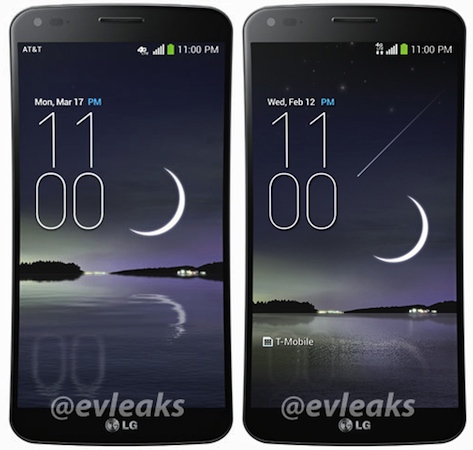 This is still the 6 inch Snapdragon 800 handset with a curved case and self healing back we knew, only with different connectivity options. The international model has already passed the FCC and it has already landed on some European retailers. No idea of a release date or price for the USA, but the dates shown on the screens are clear indications of the release times.

This shows that on March 17th we’ll get the AT&T version and on February 12th we’ll get the T-Mobile model. Let me remind you that this model does LTE, it has a micro SIM card slot and it was announced in October originally. It has 2 GB of RAM, a 13 megapixel camera and physical back buttons like the LG G2.