As CES 2014 and MWC 2014 approach, we get to see more and more pictures of upcoming devices, including handsets from the likes of Huawei. What we see here is the Huawei Ascend Mate 2, pictured for the first time in shots that are not blurry at all. 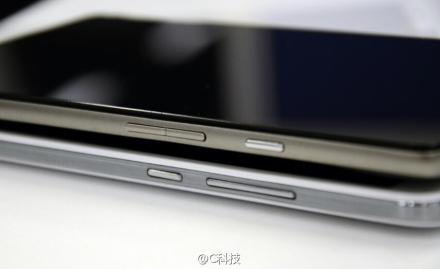 The original Ascend Mate was unveiled at CES 2013 and it was bound to have a follow-up, since it was merely the first phablet of the Chinese company. The device packed a 6.1 inch display and it was quite big at the time. The Huawei Ascend Mate 2 will continue the trend and measure 161 mm in length and 9.54 mm in thickness.

It will weigh around 202 grams and integrate the same screen diagonal of 6.1 inches. This display will offer a 720p resolution and inside the phablet we find a HiSilicon Kirin910 processor, a quad core unit clocked at 1.6 GHz. In the camera department, we’ll get a 13 megapixel shooter at the back and a 5 megapixel one at the front. The shell of the newcomer seems to rely on metal, not plastic this time.