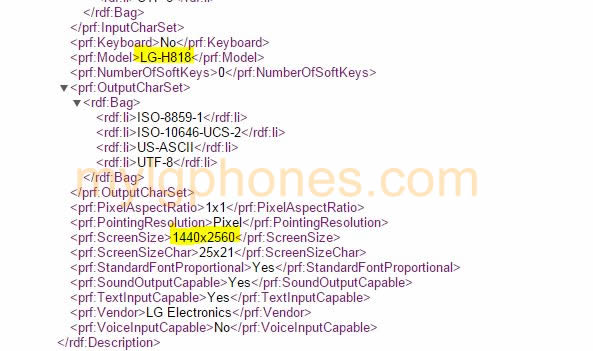 The user agent profile for the LG G4 has leaked online via UAProf and the device is shown with the codename LG-H818. Weeks ago, the AT&T version of the handset also appeared in an user agent profile with a pretty close model number.

Back then it was LG-H810 and this one is very close. Of course, the LG G4 is not ready for MWC 2015 prime time, as the folks of LG themselves admitted, but in May the LG G3 will become one year old, so it’s time for an upgrade soon. The info in the UAProf for the LG H818 shows a Quad HD display and other than that we have no other details, sadly.

We’re expecting a diagonal of 5.5 inches, if not a bit smaller, a Snapdragon 810 CPU, since LG praised it already on the LG G Flex 2 and 3 or 4 GB of RAM. There should be a 20 MP camera on board, a front 5 MP selfie shooter (or more) and physical back buttons. Recent reports claim that the Verizon LG G4 aka LG VS999 was spotted with a 3K display. The LG G3 had some disappointing aspects regarding the screen and its Quad HD approach was a gimmick. Is LG ready for 3K?