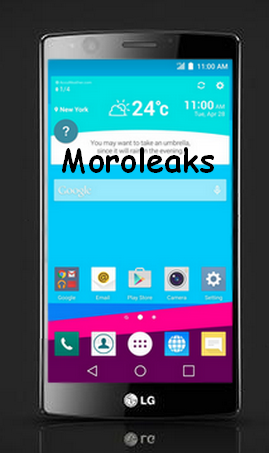 The LG G4 has leaked again, this time via a Twitter account called @Moroleaks. The device seems to have bigger bezels than before and some minor UI tweaks, that change the previous LG UI with some Material Design cues.

Frankly speaking, it’s not the side bezels we have problems with, but rather the wasted space below the display. If you look closely, there’s something a bit off here, since the left side bezel seems to be more proeminent than the right one, sort of like a double edge. It feels like HTC One M9’s approach with that ridged edge… Anyway, the product is expected to drop on April 28th, during a special event.

We’re expecting Lollipop on board, an 8 MP front camera, Snapdragon 808 CPU and 3 GB of RAM, plus a 16 MP back camera. A 5.5 inch Quad HD screen and a 3000+ mAh battery are also good guesses. Teasers will be plenty these days, so keep an eye on our website.  So, is this render fake or what?