Home Android LG H959 Snapdragon 810-Based Handset Gets Leaked in GFXBench, Could it be... 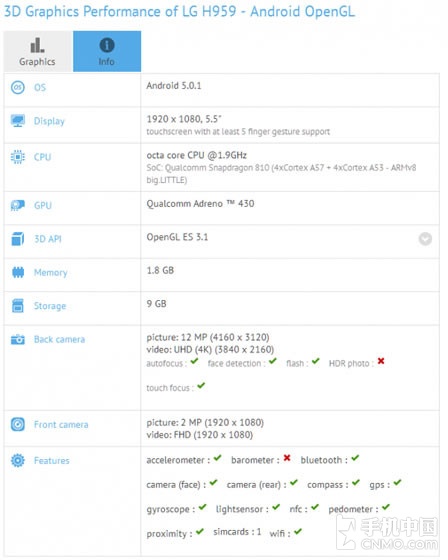 While the LG G4 has already been confirmed as lacking from MWC 2015 and launching further in the year, the device has apparently just leaked. A model going by the name LG H959 has appeared on GFXBench, with some very strong specs. We remind you it may or may not be the LG flagship of 2015.

The newcomer is dubbed LG H959 and it comes with an octa core 64 bit Snapdragon 810 processor, as well as a 5.5 inch Full HD screen. The screen part is odd, since it would mean LG is downgrading the specs of the G3. The OS here is Android 5.0.1 and judging by the diagonal, we could speculate this may also be a G Pro series device. There’s 2 GB Of RAM, 16 GB of storage, a 12 MP main camera and a 2 MP front shooter.

The camera specs, RAM and storage are pretty modest and certainly point at a device with a lower end setup than a flagship. Of course, the LG G4 may debut in several versions, like the G3, a lower specced and cheaper one and a higher specced unit with a higher price.