LG Optimus Vu was recently rumored to come to Verizon, but not with its original branding. Instead it will be called LG Intuition and branded Verizon, as shown in the pic below. The squared edge 5 inch phablet took a very long while to debut, since it was announced in February and only now it reaches the stores. 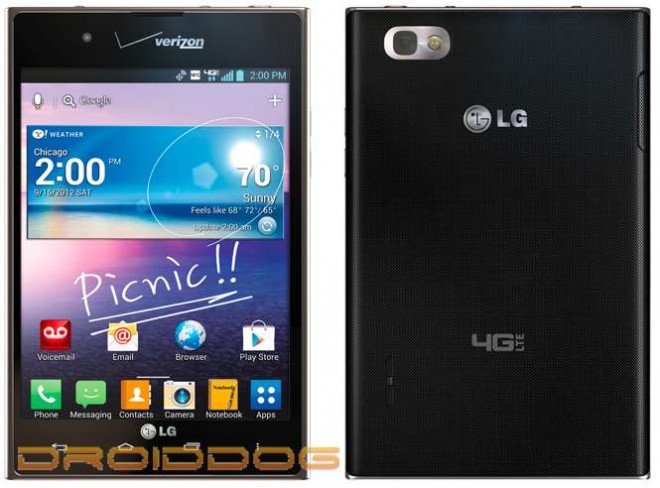 The press shot of the device indicates the date September 15th and usually when a date is mentioned on the screen, that’s when the product debuts. Of course you should take the info with a grain of salt and many of you will probably ignore the product, seeing that Samsung will launch its new Galaxy Note II in just days from now. LG Intuition offers a 8.5mm waistline, weighs 168 grams and sports a 5 inch 768 x 1024 pixel display (HD IPS LCD). It also comes with Dolby audio technology, 32 GB of storage, 1 GB of RAM, HSDPA, LTE and Bluetooth 3.0.

It has NFC, microUSB 2.0 with MHL and at the back there’s an 8 megapixel camera with autofocus, LED flash, image stabilization and 1080p 30 fps capture. The OS of choice is the antique Android 2.3 Gingerbread, but I truly hope that Verizon will be able to launch it at least with Android 4.0 ICS, or else the phablet will be put to shame by the Galaxy Note II.