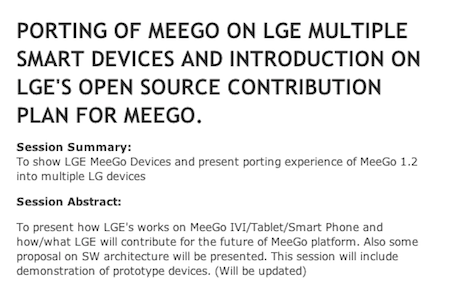 LGE MeeGo Devices were mentioned and prototypes running MeeGo 1.2 on multiple LG units. The smartphone version is also mentioned in there and considering LG has just recently joined the MeeGo world, it’s exciting to see them coming up with innovations so soon after Nokia has bailed out of this initiative, although not totally yet.

Can you imagine an LG Optimus phone with some MeeGo love on board, fused with the Optimus UI? I, for one, would leave customization aside and focus on the core of MeeGo, appealing on its own.